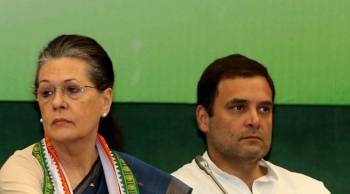 For the last few years, the Congress party has been in free fall, particularly after its humiliating loss in the 2019 Lok Sabha elections. In every subsequent State election, the party has fared miserably, plumbing the depths in the West Bengal Assembly polls where it failed to open its account. Apart from electoral repudiation, its government in Madhya Pradesh ceded power pre-term due to defections, and the three remaining States under Congress rule – Punjab, Rajasthan and Chhattisgarh - are riven with internal dissensions. Never has a political outfit been more in need of resuscitation through major structural and ideological surgery than the directionless Congress today.

So, when the Congress party announced that it would hold the long-awaited meeting of its top decision-making body, the Congress Working Committee (CWC) on 16th October, the “sickular, urban-naxal” liberals were full of anticipation that the meeting would signal the long overdue reboot and makeover of the Grand Old Party. As the only other pan-national party, it could then hopefully pose a credible and combative secular challenge to an authoritarian, inept regime that has impoverished millions, abridged our freedoms, destroyed almost every institution, divided us and left the country stranded without a friend in the neighbourhood.

Sadly, anyone expecting positive, transformative initiatives from the present-day Congress is bound to be disappointed. What transpired at the CWC meeting was a stunning, unabashed declaration that the Congress party’s primary concern is the protection of the Gandhi family’s paramountcy and not the country’s interests or for that matter, even the party’s. At a time when its leaders should have introspected on the dire straits that the party is in and used the forum to initiate much needed reforms, Sonia Gandhi discarded even the pretence of democratic functioning and debate.

Launching a blistering offensive against the G23 critics within her party who had the temerity to demand an organisational overhaul in the wake of unremitting electoral defeats, she even shrugged off her status as unelected interim President to announce definitively and defiantly that she was the full-time President of the party. The only significant decision taken was to postpone the election of the party President by another year, with Rahul Gandhi agreeing to consider donning the mantle once again. Shamefully, the G 23 members bent low in abject obeisance, with not a squeak from them. The meeting was an absolute family coup!

Comparisons are inevitably drawn between the two national parties and their modus operandi. Both the BJP and the Congress function under an imperious high command whose powers are uncircumscribed by democratic norms of consultation and consensus, and where State leaders are no more than supplicants.

There is also a glaring difference between the two parties! As pointed out by a leading social scientist, the authority of the ‘formidable twosome’ stems from their ability to win elections, whereas the Congress dynasts hold the reins despite unremitting failures. The contrast is stark: power emanating from performance versus power as dynastic entitlement. Just think about it: the only notable change in the Congress organisational structure in the last few years has been the promotion of Priyanka Gandhi as General Secretary. Today’s Congress is indubitably all about the family!

In cricket, there are captains who, tentative about their fielding strategy, end up placing a fielder wherever the ball has last been hit by the batsman. Cricket commentators disparagingly call out such captains for “following the ball”, essentially berating them for being unimaginative, formulaic leaders. That’s what the Congress leadership has been doing in the last few years – reactively following the ball.

Bereft of an ideology or principles, the Congress party has lurched from one failed strategy to another, and more often than not, aped the publicity contrivances of the successful parties. Having initially projected itself as the secular bulwark against Hindutva and failing miserably, the party adopted the soft Hindutva avatar. Rahul Gandhi went temple hopping, flaunting the sacred thread and his Brahmin lineage. Having assessed that the party had suffered electorally on account of being deemed a “Muslim party”, it decided to shun Muslims and their problems altogether and project itself as softly Hindu. But that did not deter the Congress from opportunistic alliances with blatantly communal Muslim outfits for electoral purposes. Rahul Gandhi also resorted to the Modi-inspired formula of insulting one’s political opponents – “chowkidar chor hai” - which proved self-defeating.

Rahul Gandhi’s bluster knows no limits. Addressing Congress workers in July, he stated grandiosely: “There are many people who are not scared but are outside the Congress. Bring them in and those scared within our party should be shunted out. We do not want them; they are not needed. We want fearless people. This is our ideology.” He should have added the caveat that the kind of fearlessness that he sponsored needed to be tempered with submissive deference to the high command i.e., the family. This qualified fearlessness was there for all to see during the CWC meeting on 16h October, when not a word of criticism was voiced despite the party being in shambles.

Cynical political calculations are at times bestowed with a halo. Indulgent political analysts have interpreted Rahul’s criticism of crony capitalism, his no-holds-barred attack on the present right-wing government, voluble support of welfare schemes for the poor, along with the induction of Jignesh Mevani and Kanhaiya Kumar as clear markers of his intent to shepherd the Congress in a deliberate ideological shift to the left. However, the brute fact is that his countrymen have already seen him donning various contrasting disguises and are therefore unlikely to be fooled by his latest Marxist pretension.

Desperate situations call for desperate measures. The Congress seems to have decided that great leaders of the past need to be cloned in order to revive the fortunes of the party. Bring on the epigone!  The latest strategy of the Congress to regain relevance as a major political party is to project the attractive and articulate Priyanka Gandhi as the living embodiment of her grandmother, the formidable Indira Gandhi.

The recent Lakhimpur Kheri tragedy presented the setting for Priyanka to do a perfect impression of Indira Gandhi after her arrest in 1977 by the Janata government on the flimsiest of grounds, which she exploited brilliantly to stage a political comeback. Priyanka was arrested when she was enroute to meet the families of the victims of the Lakhimpur Kheri violence and detained at a guest house in Sitapur district. Speaking in a shrill tone and displaying the combativeness that evoked memories of her famous grandmother, she turned her detention into a full-blown media opportunity, with the cameras focussing on her arguing with police officers, sweeping the floor of her room, giving extensive interviews and even tweeting an appeal to the PM about being detained without an FIR and demanding the arrest of those responsible for the deaths of the four farmers. It was a dramatic performance of the highest calibre!

But histrionics and other gimmickry cannot be a substitute for meaningful reform of the Congress party. Instead of being delusional and living in denial, the Gandhis should know by now that the halo around the family has long since dissolved. To invoke an analogy from the US politics, Donald Trump won the 2016 Presidential election because his rival, Hilary Clinton was anathema to the progressive wing of the Democratic party and the uncommitted voters, who skipped voting as they felt that, apart from her personal foibles, she was for too long a fossil within the Washington beltway to be able to bring about transformative change.

In like vein, successive elections in this country have shown that the majority is averse to a Gandhi leading the country - it’s that elementary! The days of blind worship of the hereditary crown prince are gone. A mature electorate now endorses leaders who have earned their stripes! The Congress can once again recover its mojo by restoring inner democracy and vesting the party’s leadership in somebody outside the family. In fact, after Rajiv Gandhi, the Congress has been a force only when the Gandhis have been mentors rather than the oligarchs. Tragically for our democracy, recent events point to a continuance of the hereditary dictatorship.

In this grimmest of times when there is a potent assault on the idea of a secular and democratic India, it is a colossal tragedy that the party that spearheaded our freedom struggle has now clearly prioritized family over nation, which is nothing less than a criminal betrayal of our founding fathers.

The writing is on the wall for all to see. It does not require an expert political analyst to work out what sickens the Congress party, which for some time now, has been treated by the Gandhis as their patrimony; nor do we really need the diagnostic skills of psephologists to puzzle out the prospects of the Congress party in the elections to come. Like in the 2019 Lok Sabha elections, the Congress party is once again primed to play “spoilers” for the parties that pose a credible challenge to the current regime. And the ruling dispensation is already uncorking the champagne!