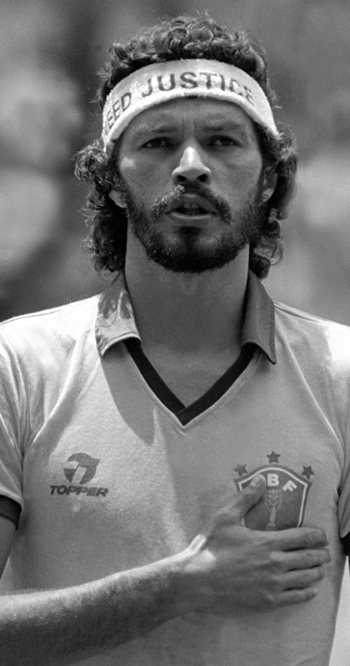 The Other Great Socrates

This tectonic switch from my wonted overworked theme of political monsters, dragons and serpents has been inspired by a friend’s nostalgic trip down memory lane, which he shared with me as hors d’oeuvre leading up to the Soccer World Cup feast slated for November-December. He forwarded the names of the eleven footballers in the World Soccer Team of the 20th Century selected in 1998 by a panel of 250 international journalists. No football aficionado can cavil at this elite list of football immortals that included Pele, Maradona, Cruyff, Platini, Di Stefano, Beckenbauer, with Lev Yashin as goalkeeper, but I did feel a twinge of grievance at the omission of my hero, Socrates Brasileiro Sampaio de Souza Viera de Oliveira who had as many strings to his bow as words to his name.

There are great performers in every field who have captivated the world with their consummate artistry and achievements but to attain the exalted status of a true hero in the eyes of the devotees, one needs to measure up to Joseph Campbell’s simple but profound assertion: “A hero is someone who has given his or her life to something bigger than oneself.” At the end of the day, it’s not about the laurels won but what you give back to society. In addition, the true hero stands out by being humane, unselfish, honourable and the personification of integrity, without which the lustre of professional accomplishments dims and sometimes even dies in the hearts of the fans. At least that’s how it has been with me as a lifelong junkie of cricket, football and tennis.

Sachin Tendulkar was my cricketing god until he confirmed suspicions that he played only for himself. At Mirpur against Bangladesh in a crucial Asia Cup fixture in 2012, he subordinated the team’s interests in the naked pursuit of his hundredth international century. He got there but we lost the match because of his tardy scoring as he neared his century, when all-out attack was the need of the hour. He clearly believed that getting to his personal milestone was more important than winning the match. Thereafter, the not-so-uncommon refrain heard is that Sachin was a great but self-serving cricketer.

Back to my hero, the quintessential footballer and human being -- Socrates! Not trusting my erratic memory, I opened an old wound a few days back by watching a replay of that unforgettable second round encounter between Brazil and Italy in the 1982 World Cup in Spain, arguably the greatest match ever played in a World Cup. This time around, there was no heart-stopping excitement or agony, just a dull ache at what might have been!

The better team lost and, but for the superhuman goalkeeping by the Italian Dino Zoff, Brazil would have run away with the match. A telling statistic: Zoff made 18 saves, some breathtaking, whereas his Brazilian counterpart, Waldir Peres effected only 4 saves. The final scores: Italy 3 Brazil 2. Socrates as captain and midfield general was easily the best of the Brazilians, irresistible with his majestic calm, pinpoint passing and long balls. Clued into every nuance of the game, he masterfully conjured up openings in a mesmerizing display of beautiful football. The move that he initiated with Zico to score the first equalizing goal was poetry in motion, a one-two and then a deft side-footed shot that he zipped past a flailing Zoff into goal.

The 1986 World Cup had another heart-wrenching denouement. Leading up to the fateful encounter with France, Brazil had won all four matches with Socrates in imperious touch. Against France, Zico missed a penalty and after extra time the score was one all. It all came down to the penalty shootout. The bearded ‘master of cool’ took his penalty kick from his usual standing stance, missed, Brazil were out of the World Cup and my heart broke again. Cold statistics, however, do scant justice to the impact that Socrates had on almost every game he played. In 60 games for Brazil, he scored 22 goals, but the selfless team man spoon-fed many more for his teammates, which they have always gratefully acknowledged.

Socrates was one of the few sports persons who transcended his sport when still at his peak as footballer. He used his star power, not for garnering lucrative commercial contracts, but for the cause of democracy and universal suffrage, of which he became one of the most vocal proponents in Brazil. His political activism was a sterling act of courage at a time that the ruling military dictatorship was ruthlessly crushing dissent. Because of warriors like Socrates, a new Constitution was promulgated in 1988, bringing military rule to an end. It was followed in 1989 by the first direct presidential election in 30 years and the first election based on universal suffrage. Whereas Socrates was in the forefront in the fight for democracy, the legendary Pele, by his deafening silence, was nauseatingly complicit with the military dictatorship.

Those who knew Socrates were not surprised at his passionate political and social activism. Never one to look away, injustice and inequality unfailingly spurred him to action. At his first club, Botafogo, his nobility and sheer goodness shone through in myriad ways.

Appalled at the paltry emoluments received by the ancillary staff such as the masseur, the stadium janitor, the laundry woman, Socrates harangued and managed to persuade his teammates to share one-fifth of their players’ bonus with them. He did the same when he joined the Corinthians club.

On the pitch, Socrates was no different, as fiercely committed to justice and integrity as he was to beauty and artistry in football. Soon after joining the Corinthians club, in a crucial game in the premier Brasileiro tournament, the Corinthians lost by a lone goal against their fiercest rivals. In his post-match comments, the authoritarian director of the club publicly insinuated that his goalkeeper had deliberately bungled in order to help the rival side. The goalkeeper was distraught, and his teammates outraged. In the next match, Socrates scored the winning goal, turned around, ran back to his own goal and hugged his goalkeeper in a moving public display of solidarity that brought the house down. When the goalie gushed his tearful gratitude, Socrates shrugged and said, “Jairo, that’s the least you deserve.”

But there were times when Socrates’s teammates were flummoxed and incensed by his absolute integrity. If the referee gave a penalty or an offside wrongly in his team’s favour, he would correct the referee or tell the media post-match about the refereeing error. In the 1986 World Cup, he caused a major uproar when, after Brazil’s victory over Spain by one goal, he publicly stated that a perfectly legitimate goal by Spain had been disallowed, adding for good measure that the World Cup was rigged in favour of the big sides like Brazil.

As a qualified doctor he practiced for some time in the early 1990s and even set up the Medicine Socrates Centre, but he was so shocked by the unethical professional conduct of his colleagues – for instance, recommending surgery when none was required – that within months, he closed the Centre.

Socrates identified lack of agency as the biggest issue facing footballers. They were virtually slaves of the clubs that owned them, condemned to uncertainty and job insecurity, their careers at the mercy of the directors and manager of the club. Socrates firmly believed that clubs needed to be more democratic and give up the soul-killing notion that they were capitalist enterprises focused solely on profits. From this personal critique of the club’s oppressive milieu emerged what became known as Corinthians Democracy, a Socrates brainwave that resonated and spawned imitators throughout the footballing world.

In this trailblazing system, all players were involved in the decisions concerning the club. Important matters were put to a vote and decided by a majority.  The age-old system of the concentracao that shackled players to the team hotel three days before a game was relaxed for the married players who were permitted to check in the day before a match. The project was about freedom tempered with responsibility and the players eagerly embraced it.

Socrates was an unapologetic bohemian who smoked like the proverbial chimney and drank to the lees (another reason why I adored the guy, according to my friends). He had a very full love-life, but he treated all women with such respect and thoughtfulness that never was an unkind word said about him. He died at the age of 57 years in 2011.

What the most famous of philosophers, his namesake, preached two thousand four hundred years ago about how to live life, would have been the most felicitous epitaph to my footballing hero: “I pray thee O God that I be beautiful within…. The really important thing is not to live but to live well. And to live well means, along with more enjoyable things in life, to live according to your principles.”  Socrates (c 470 – 399 BC)