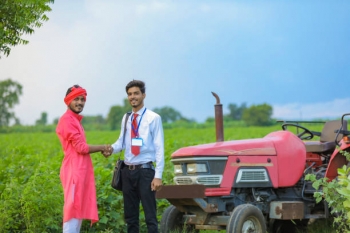 The most inhuman manner in which a 27-year-old pregnant daughter of a specially-abled farmer was recently crushed to death under the wheels of a tractor which was being forcibly driven away by recovery agents hired by Mahindra & Mahindra Financial Services Limited (MMFSL) in Hazaribagh, Jharkhand, is indeed a terrible tragedy.

Mithilesh Mehta, according to media reports, availed loan from MMFSL to buy a tractor. He had been prompt in paying his equated monthly installments (EMIs) but defaulted for the last six months, due to financial crunch.

This July, MMFSL asked Mehta to pay a total amount of Rs 1.2 lakh in full and final settlement of his dues but later demanded an extra amount of Rs 10,000.

Mehta's request for an extension of time till this September 22 was agreed upon. Yet, suddenly on 15 September, while Mehta was away in the fields, recovery agents barged into his house unannounced. Reportedly, there was an altercation between the recovery agents and Mehta's daughter. When she tried to stop the tractor being driven away, she was allegedly run over by 26-year-old Roshan Singh, an employee of the outsourced recovery agency.

The accused has since been arrested on charges of murder under sections 302/34 of the Indian Penal Code. The ongoing probe by a special investigation team is expected to bring all those responsible for the death of the young woman to book.

No sooner the incident hit national headlines, Dr Anish Shah, MD & CEO of the Mahindra Group took to the social media, where he wrote, "We are deeply saddened and disturbed by the Hazaribagh incident" and added that the same would be investigated from all aspects. The Company will also undertake an examination of the practice of using third-party collection agencies that has been in existence.

Calling it as a "terrible tragedy, Mr Anand Mahindra, Chairman of Mahindra Group, tweeted, "Our hearts go out to the family in this time of grief".

It is laudable that the Reserve Bank of India (RBI) has taken cognisance of the unsavoury incident and swiftly taken action on MMFSL.

However, to effectively curb the menace of unruly recovery agents, deterrent penal provisions merit incorporation in the extant guidelines of the RBI. More so because, instances of recovery agents becoming a law unto themselves have become the new normal.

More recently, 4 loan recovery agents were arrested in Telangana for taking possession of vehicles of a borrower's relatives and even neighbours.

Last January RBI imposed Rs 2.5 crore penalty on Bajaj Finance Limited for its failure to ensure that its recovery agents did not resort to harassment or intimidation of customers as part of its debt collection efforts and thereby failing to adhere to its directions.

Fines may not serve as a dampener for finance companies. However, to have the desired effect, it is necessary to drive home the message about the certainty of punishment for the person(s) concerned employed by the financial institution, as also its outsourced agency and their personnel who are deployed for recovery activities which would certainly serve as a deterrent.

Although COVID-19 has compounded the finance and debt situation, what is the financial vulnerability of the average Indian?

Let's quickly glance through the Household Finance Committee Report (published in 2017). The Committee, constituted by the RBI, has noted among the events that have had the largest financial impact on the family during the 2 years prior to the survey date are the loss of crops or livestock due to bad weather, medical emergencies associated with hospitalisation and damage to properties, farm equipment or other business capital, due to a natural disaster. Cumulatively, these events accounted for the major financial losses in more than 60 percent of cases.

The next three sources in order of financial vulnerability concern reductions of the income-generating capacity of the household, due to job loss, an increase in the costs of agricultural inputs, or a deterioration in overall market conditions. Cumulatively, they accounted for the major financial losses of around 25 percent of households.

Only a quarter of households were able to deal with emergency expenses by drawing upon accumulated wealth. Instead, half of the population counted on help from family, friends and moneylenders. Instead of secured debt, most Indian household debt is unsecured (56 percent), reflecting high reliance on informal, non-institutional sources of lending such as moneylenders and intra-family loans. 69 percent of households were found to deal with medical expenses by drawing upon informal sources of funding, 26 percent of such loans were from moneylenders.

Over a period of time, such debt can adversely impact an individual mentally. Debt and mental health problems fuel one another and research in the US has found a correlation between mental illness and financial problems with approximately one in five American adults experiencing depression, anxiety and psychotic disorders each year.

Marketers use psychology to make us buy their products and pay later. But for the customer, hasty decisions may have its adverse consequences. Whatsoever is the attraction to go in for "buy now pay later" schemes, the fact of the matter is that, once the credit (loan) is availed, it has to be repaid over a fixed predetermined time frame in two components -- the principal and an interest amount. If one does not read carefully in between the lines, there could be hidden charges as well.

As an illustration, let's consider a young salaried person, earning Rs 3 lakh annually, is tempted to own a classy car. With many financiers seemingly offering loans between 85 to 90 percent of the "on road price" of the car for a period up to 7 years or 84 EMIs, if he/she considers the offer, (say Rs 7 lakh loan spread over seven years), the borrower has to pay an EMI of approximately Rs 11,000 out of monthly salary of Rs 25,000. The borrower doesn't bother to calculate that on a Rs 7 lakh loan he/she would be making a total payment of approximately Rs 9.31 lakh that includes a total interest of approximately Rs 2.31 lakh, excluding processing charges and applicable taxes which are extra.

Should the borrower have adequate finances, then, the loan can be repaid without hassles. But for some reason, the borrower misses paying EMI for 3 consecutive months, then it is altogether a different scenario.

The financer, initially will give notice. Then, interest will be added on to the borrower's pending payments. Should dues remain unpaid, recovery agents would be deployed by the financier to retake possession of the vehicle.

If one is self-satisfied that it is quite simple to hire mobile app-based vehicles, there are hidden dangers. Reportedly, there are many harrowing instances where families with children and senior citizens on outstation trips using hired vehicles have been stopped by unruly recovery agents. The driver is threatened to pay up his overdue EMIs right away while the passengers are pulled out of the vehicle and left literally stranded on the road.  Instead of facilitating the passengers, the only solution the app-based company may offer mostly is to advise the customer to book another ride without an iota of empathy. So, hiring a vehicle through mobile app is at one's own risk. Understandably there are built-in algorithms and in most of the cases, the company cannot be contacted easily even during an emergency.

What are the guidelines on the engagement of recovery agents?

On 24 April 2008, RBI issued specific guidelines to Banks that was also made applicable to non-financial banking companies on the engagement of recovery agents.

Among others, at the level of the financial institution, there should be in place due diligent process. Importantly, as a matter of abundant caution, debt collection agencies need to carry out verification of the antecedents of their employees, which may include pre-employment police verification.

To ensure due notice and appropriate authorization, the borrower should be provided with the details of recovery agency firms/companies while forwarding default cases to the recovery agency.

RBI has also made it mandatory that all recovery agents must complete 100 hours of training and obtain a certificate from the Indian Institute of Banking and Finance.

On August 12, the RBI issued fresh instructions that are applicable to all commercial banks (including regional rural banks), Cooperative Banks, NBFCs, Asset Reconstruction Companies and all India financial institutions which bar recovery agents from resorting to intimidation of borrowers as well as calling them before 8 am and after 7 pm. They are prohibited from sending inappropriate messages to borrowers in any form or making threatening or anonymous calls for recovery of overdue loans, or making false and misleading representations. RBI has also warned that any violation of the above will be viewed seriously.

Similar to Mithilesh Mehta's case, in ICICI Bank Ltd versus Prakash Kaur and others, the Supreme Court, nearly 15 years ago, observed that we are governed by the rule of law in the country and the recovery of loans or seizure of vehicles could be done only through legal means. The banks cannot employ goondas to take possession by force.

To prevent recovery agents from adopting uncouth methods including brutally killing innocent people during the debt recovery process, there is an imperative need for financial institutions to follow the Apex Court's directions, both in letter and spirit.