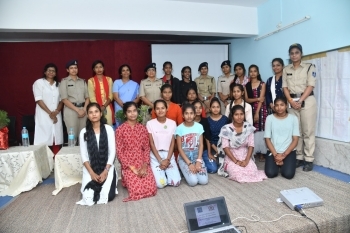 The Story of Nyaya Chaupal

Most NGOs, including faith-based ones, are mainly involved in welfare and development activities in the process of empowering women. Organizing women into Self Help Groups (SHGs) in rural areas and urban slums and supporting them to start income generation activities is a commonly adopted strategy by majority of NGOs. Most of them are hesitant to enter into the area of ensuring or enhancing security of women by educating and supporting them to fight against violence inflicted on them, especially domestic violence.

Uday Social Development Society, the Social Work wing of Holy Spirit Sisters (SSpS) of the Central Province, has been making an experiment in empowering women by forming Nyaya Chaupal-Women’s Legal Cell since 2017 for enhancing their security and preventing violence.

The Nyaya Chaupal consists of women volunteers who are trained to help themselves and others to settle issues related to different forms of violence that women and girls face. The selected women leaders are given training on various issues related to gender discrimination, patriarchy, exploitation of women and men at workplace, child marriage, child labour, process of registering FIR, woman's right to property, leadership, Indian Constitution, government schemes, etc. so that they can help and guide other women in the slums. “Nyaya Chaupal is a forum and a community-based legal aid program for the victims of violence by the survivors of violence,” says Sr. Lizy Thomas, the Chief Functionary of Uday Social Development Society.

According to Sr. Lizy, 181 women leaders are working as volunteers on prevention of domestic violence and women's issues. Among the 181 women, 132 have become members of Nagar Suraksha samiti and Shakti Samiti attached to the police stations. Shakti Samities and Nagar Suraksha Samities are registered with police stations for community policing. More than 750 cases related to domestic violence have been resolved through counselling and assistance by the members of Nyaya Chaupal from 2017 to 2021. The women leaders visit government departments to discuss various issues related to women’s security, submit applications and do the follow up.

The women who have volunteered to be members of Nyaya Chaupal are proud of what they are doing for liberating women from domestic violence and preventing different kinds of violence against women and girls. Phoolvati Sahu, Alomali Rai and Rajkumari Rajput of Jatkhedi slum of Bhopal have been part of Nyaya Chaupal from its beginning.

Three of them said, during an interaction, that they were victims of domestic violence not only from their husbands but also from in-laws and sister-in-laws. “My husband used to beat me and left me after my first delivery and even filed a false case against me,” said Alomali Rai. Participating in the training sessions imparted by Uday Society gave her courage to fight against false case and join the team to support other women who are victims of domestic violence, she acknowledged.

The three women said that they together resolved about 150 cases of domestic violence and narrated a few of such cases. They did not want to reveal the names of the women and men involved in these cases with a view to maintain confidentiality. In one case, the husband used to beat wife on a regular basis after consuming alcohol. On receiving a complaint from the neighbours, the three women met the husband and counselled him not to repeat violence on his wife. They explained to him the provision of the Domestic Violence Act. But there was no change in him. As a next step they complained to the police. The police called him to the police station and threatened him with arrest. They also advised the wife to go to her parents’ house for some days. For two months he struggled to cook and do the household chores. Meanwhile, the three women continued their efforts to make him understand the need for stopping alcohol consumption. After two months he went to the police station and gave in writing that he would not inflict violence on his wife. As a result, the police and the three women called his wife back to husband’s home and he kept his promise.

Another incident is related to stopping a child marriage. They came to know from a family that had come to Bhopal as migrant workers that the parents of a 14-year-old girl in their village Shakti Garh in Betul district was planning to marry off their minor daughter. They tried to persuade the parents to postpone the marriage till the girl attained the age of 18. But the husband-wife duo was not willing to postpone the marriage plan.

The three women under the leadership Alomali Rai contacted the Sarpanch (Village Panchayat President) through the police of Misrod Police Station and warned the Sarpanch that if the marriage takes place he would be in trouble. They asked him to bring five men (panch) from the village to Bhopal and give a written assurance that the said marriage would not take place. As the Sarpanch got frightened, he brought ten men to Bhopal and they gave in writing (panchnama) that they would take the responsibility of preventing the marriage.

According to the women, a lot of change took place in them also as a result of becoming members of Nyaya Chaupal. “I was very shy and did not know how to speak before others and also frightened of the police. During the last five years, I learned how to speak before other people, including the police and other officers. The training given by Uday Society helped me to enhance my knowledge on various legal issues, including POCSO (Protection of Children from Sexual Offences) Act. Now there is no fear at all in me of the police or of government officers,” said Phoolvati Sahoo. “We are freely interacting not only with the police department but with the officers of other departments and get the work done for the women of our area,” added Rajkumari Rajput.

As a sign of the membership of Nyaya Chaupal, all women volunteers wear uniform sarees and it is very helpful for their identification, when they approach the community members, especially men who indulge in domestic violence as well as different officers.

“It was not easy for us in the beginning. The members of our own community, including women, ridiculed us and some men laughed at us saying that they are not able to set their house in order and they are going to settle disputes in others’ houses,” said Bindu Prajapati another member of Nyaya Chaupal. The discouragement and taunting by other women and men did not prevent them from intervening when domestic violence took place in the families of their respective areas. The various training sessions they got from Uday and the cooperation from the police stations emboldened them.

Now the Nyaya Chaupal experiment has assumed a wider dimension, as it has become a joint venture of Uday Social Development Society and the Police Department with the generous support of the latter. In view of expanding the experiment to more slums, Uday Social Development Society conducted a sample survey of 1000 households in 20 slums of Bhopal in 2020. The survey revealed that 94.6% of women suffered domestic violence during the lockdown.

On the International Women's Day in March, the Society organized a programme in which more than 1000 women from the 20 slums participated. Mr. Vineet Kapoor, Deputy Commissioner of Police (DCP) Head Quarters, was the Chief Guest. He heard the testimony of many women survivors of domestic violence. They shared the violence they had suffered in their homes and the changes that have taken place in them as a result of joining Nyaya Chaupal.

In his address, the DCP asked why not the experiment is replicated in the areas of other police stations of Bhopal. He expressed interest to make it a joint venture of Uday Society and the Police Stations. He proposed to implement the experiment in 8 police stations (Misrod, Bagsevnia, Kolar, Aishbagh, Piplani, Avadhpuri, Kamla Nagar & Katara Hills) by training 30 women volunteers from each of the police station area. The Uday Society agreed to the proposal and the proposed project of training 240 women as leaders and volunteers is planned jointly and it is to be completed by the end of December 2022.

According to Mr. Kapoor, the 240 trained women leaders will be linked with the police stations as members of 'Shakti Samiti'. The Shakti Samiti is planned as a wing of URJA (Urgent Relief and Just Action) Desk in every police station, which will address the issues of domestic violence through voluntary efforts.

URJA Desk is a special one set up for immediate hearing, assistance and action on violence against women and at these help desks the cases are handled by women police personnel with separate infrastructural set up. Currently the Desk is established in 700 police stations of Madhya Pradesh. “If the Nyaya Chaupal experiment under the 8 police stations is proved successful, it will be replicated in all 45 police stations of Bhopal Municipal Corporation with the support of other NGOs,” says Mr. Kapoor. The Uday Social Development Society will provide the resource team to train the NGO personnel.

On the basis of the experience, Sr. Lizy has presented the following as the objectives of the Chaupal.

•    To make women and adolescent girls aware of the legal provisions related to women security and protection so that they are empowered to get justice for themselves and others.

•     To reduce the cases of domestic violence in communities through counseling and referral services.

•    To provide legal assistance to the victims and to plug loopholes in the legal process.

•     To take initiatives to prevent domestic violence against women with the participation of women volunteers of the community.

Sr. Lizy said the UNICEF and the Azim Premji Foundation have shown interest in expanding this experiment to new areas.

When the activities of many NGOs, especially faith-based ones, are viewed with suspicion by governments, including the police, Nyaya Chaupal shines as a model of excellent cooperation between an NGO and the police department. Any successful experiment in empowering the underprivileged sections in society requires building good relationship with different stakeholders, especially with government departments. Uday Social Development Society has presented a replicable model of collaboration with the community and the police department through the Nyaya Chaupal experiment.