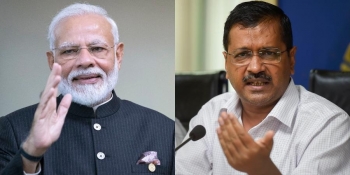 The clone inherently shares striking similarities with the original prototype. Although in physical appearance and sartorial preference, the mufflered Arvind Kejriwal is very different from the dandyish Vishwaguru flaunting his flashy, multi-hued wardrobe, they have much in common.

They are Machiavellian realists who are possessed with an all-consuming lust for power and refuse to be distracted by ethical considerations of right and wrong.  They traffic in falsehoods and are so addicted to mendacity that exaggeration is their nearest link to the truth. They shamelessly parade religion in the public square for personal benefit, heedless of the damage it does to the secular fabric. Autocratic to the core, they brook no dissent, and competitors are quickly and effectively neutralized. Predictably, they take personal credit for every achievement but are also deft at deflecting blame when things go wrong.

This was not the public perception of Kejriwal when he first appeared on the public stage in 2011. Then, most saw him as a starry-eyed idealist on a mission to awaken people to the rot in the system.

Admittedly, the UPA government’s venality was there for all to see – the 2G scandal, the Adarsh Housing scam and the brazen CWG abomination that, inter alia, even committed the ultimate obscenity of finalising a tender for purchase of toilet rolls at Rs 4,500 per piece. However, it was the India Against Corruption (IAC) movement helmed by Kejriwal – with Anna Hazare as bewildered talisman -- that brought the issue of corruption to the forefront of public consciousness. The IAC ignited a nation-wide stir of protests and demonstrations that coerced the jittery UPA government to pass the Lokpal Bill 2013.

During that tumultuous period, Kejriwal managed to hold on to the halo of the indefatigable crusader against corruption, though even at that time, he gave glimpses of his ideological bent and driving ambition. He roped in Hindutva icons Ramdev and Sri Sri Ravishankar to the IAC fold, while keeping out Muslims from the core group, but in the din this palpable communal stratagem went unnoticed.

Much later, Prashant Bhushan conceded that the IAC was “propped up by the RSS and BJP”, a fact apparently known to Kejriwal alone. Despite the IAC having seasoned, experienced professionals, it was the upstart who called the tune through sheer ingenious guile. With regard to abetting personal interests, an initial draft of Team Anna’s Lokpal Bill proposed that winning the Magsaysay award was a desirable qualification for the post of Lokpal member. And Kejriwal is a Magsaysay award winner.  This blatantly nepotistic provision was subsequently dropped.

In late 2012, Kejriwal broke away from Anna Hazare on the issue of converting the IAC movement into a political entity. Even as the old man, having exhausted his utility, faded into the background, Kejriwal formed the Aam Aadmi Party (AAP), determined to exploit the mass public support and goodwill generated by the IAC movement. His instincts were bang on as the new kids on the block emerged ahead of the Congress with 28 of the 70 Assembly seats in the 2013 Delhi election, and formed a short-lived government with the help of the Congress. With the benefit of hindsight, it must be said that his subsequent resignation over the alleged failure to get the Jan Lokpal Bill passed, was a ruse that had nothing to do with moral scruples but was a calculated move with the long game in mind.

The newcomer was proving to be far more skilled in the soiled world of politics than the hardened politicians. And his success was founded on a Big Lie. He rode the wave of disaffection at the moral degeneration of the established political order and dangled the chimera that his party represented a brave new polity based on sturdy ethical principles and the collective will of the common man. His utopian socialist message yielded phenomenal results. In the 2015 Delhi election, the AAP won 67 of the 70 Assembly seats, an all-time record.

This was when Kejriwal decided to altogether jettison his sanctimonious do-gooder image and hitch his bandwagon to self-serving power politics. His first significant move was to banish Prashant Bhushan and Yogendra Yadav because they represented the conscience of the AAP and reminded him incessantly of the deviations from the moral code that was the raison d’etre of the fledgling party.

In another unprincipled move, he nominated two little known men – a businessman and a CA of his caste – to the Rajya Sabha, ignoring the luminaries who had slaved for the party, provoking allegations that he had commercialized the seats.

Kejriwal effectively buried the ghost of the India Against Corruption movement by his cynical manoeuvres as head of the government. He delayed the appointment of a Lokayukta inter alia on the grounds that Delhi needed a more stringent Lokayukta Act. He then conceived a Jan Lokpal Bill which he knew would never be approved by the Centre. The cruel irony is that in 2019 when the Lokayukta issued a notice to the members of the Delhi Assembly for failing to disclose their assets, Kejriwal rejected it on the grounds that legislators are not legally required to do so. Perhaps the clearest indication of his metamorphosis into an amoral, power-hungry politician was his abortive attempt to control the Anti-Corruption Bureau of the State in direct contravention of the IAC’s sacred credo that the anti-corruption units should be independent of the political executive.

Kejriwal had clearly decided to turn his back on the fight against corruption.  But to his credit, Kejriwal’s government launched hugely popular welfare schemes including free water and subsidised electricity to large number of people apart from considerably enhancing educational and health infrastructure for the disadvantaged sections. Importantly, he still maintained the image of a truly secular leader who cared for all.  The good work done coupled with inventive spin were handsomely rewarded in the 2020 Assembly elections where AAP romped home, winning 62 of the 70 seats.

The Assembly elections were held on February 8th 2020 in the midst of the anti-CAA protests in Delhi. For fear of antagonising the Hindu voters in a highly polarised atmosphere, Kejriwal steered clear of the protest sites and all-party meetings in support of the protests, a stance that the Muslims appreciated as necessary to win. The Muslims overwhelmingly voted for AAP in the election.

This was when Kejriwal’s vaulting ambition and greed for power killed his conscience and turned his heart to ice. One sadly recalls his early days in politics when he was disrupter-in-chief of the status quo and called himself an anarchist. An enduring image that ensnared a nation was the picture of Kejriwal atop an electric pole in order to restore the electricity of a labourer whose connection had been cut off because he was unable to pay the absurdly astronomical bill of Rs 15,000. Ever the consummate thespian, on a par with the Vishwaguru, his insurgent act polished his reputation as the messiah of the dispossessed. But the riots in North-East Delhi towards the end of February 2020 called him out for the diabolically clever, amoral politician that he is.

It is a truism that a man’s real character is revealed in a crisis. Our founding fathers showed us the way. During the horrendous Partition riots of 1947, Gandhiji, Nehru and other leaders waded into the killing fields to restore sanity and save lives, risking their own lives in the process. Gandhiji’s suicidal daring in setting up house in the Muslim-dominated areas of Bengal drew the following response from Lord Mountbatten: “In the Punjab, we have 55,000 soldiers and large-scale rioting on our hands. In Bengal, our forces consist of one man and there is no rioting…. May I be allowed to pay my tribute to the One-Man Boundary Force.” It is a shame that our present-day political pigmies run for cover at the first hint of trouble, even when shielded by the power of the State.

The Delhi riots of February 2020 were the most awful exhibition of human depravity since the Sikh pogrom of 1984. In those four nightmarish days, both Hindus and Muslims suffered terrible loss of life and property, with Muslims predictably bearing the brunt. In this life-threatening crisis, the Chief Minister went missing, using the fig leaf that law and order was not his domain. A man who has sought the limelight in every situation, decided to be the artful dodger when his people, particularly the Muslims, needed him most.

Despite knowing that a visit to the trouble spots would end the mayhem, he stayed away as he did not wish to antagonise the majority community. His absence was a clear act of complicity. Thomas Paine perhaps had people like Kejriwal in mind when he observed that the cunning of the fox is as murderous as the violence of the wolf.

To add salt to the Muslim wounds, Kejriwal levelled the scandalous allegation that the anti-CAA protests at Shaheen Bagh spearheaded by women who suffered untold hardship in a life-and-death cause was actually the brainchild of the BJP. Impervious to the sensibilities of the stricken, he now aggressively flaunts his Hindu identity, publicly chanting the very religion-tainted slogans favoured by the BJP. Muslims now realize that Kejriwal is not their well-wisher.

Taking a leaf out of the Vishwaguru’s playbook, Kejriwal’s latest fad is “Deshbhakti”. In pandemic times with Delhi a hot spot, the central theme of the AAP Budget for 2021-22 is Deshbhakti for which the allocation is Rs 98 crores including Rs 45 crores earmarked for planting 500 national flags at various locations across the city. Looking at the two most voluble, pretentious advocates of patriotism in our country today, one is reminded of Samuel Johnson’s aphorism that patriotism is the last refuge of a scoundrel.

Finally, a word of caution for Kejriwal. His role model’s blunders, induced by cynical opportunism, arrogance and bad intent, seem to have come home to roost. The latest to puncture a wheel in the Vishwaguru’s flailing juggernaut is the feisty Didi who had to face the entire might of the Central government, the Election Commission, the enforcement agencies, the polarising majoritarian rhetoric, and yet she literally pulverized them. The Vishwaguru has got his comeuppance! The lesson from Bengal: You cannot fool people all the time!

(The writer is a retired civil servant)