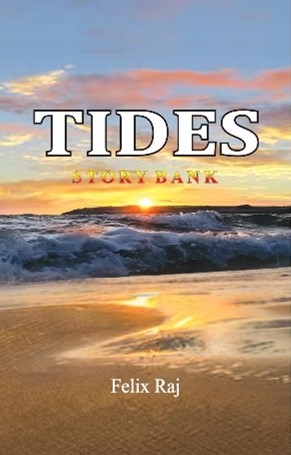 After a grand success of ‘Waves – Story Bank’, Fr. Felix Raj’s another literary creation ‘Tides – Story Bank’ narrating different experiences of life was released recently at SXUK campus. While releasing the book, Shri Jawhar Sircar, Hon’ble Member of Rajya Sabha briefed the audience regarding the ongoing scenario of the country and stressed on inclusiveness through practices of perseverance.

Dr. Shashi Tharoor, Member of Parliament from Thiruvananthapuram, Kerala has written the foreword to this book. He mentions about the literary contribution of Fr. Raj to its readers that observe people’s stories with supreme importance than anything ever.

‘Tides’ came after ‘Waves’, the first volume which had received wide acceptance among its readers. While acknowledging Fr. Raj’s contribution as an academician and an educational entrepreneur in the field of developing higher education in West Bengal, Dr. Tharoor says in his foreword that this new creation narrates vivid experiences of life that a human being passes through. Stories here express a wider angle of life starting from religious beliefs, philosophical stances, political aspects and historical references, he added.

Fr. Raj in his book expresses that today’s mundane world leave people’s minds filled with complexities and doubt, which take away peace of human life. Selfishness, hatred, disbelief, cruelty are being practiced at worst level across the world. But that do not affect the normal course of nature. Every day the world runs in its own order; seasons are changed automatically, years pass away. Despite all irregularities, incessant waves of sea keep us reminding that nature will continue to move in its own chosen path unperturbed.

Fr. Raj, in his book, spreads the message of ‘Vasdhaiva Kutumbakam’ taken from various angles of Christianity to Hinduism, from Islamic beliefs to Buddhist philosophies as preached by great leaders earlier; thus, creating an essence of reaching to one goal of ‘attainment’ through various ways. From mythological aspects to modern literature, he has narrated every aspect of humanity through an artistic way; yet presenting the non-fiction. His ex

‘Tides’ narrates stories of life. It tells its readers to experience the very truth of life rather than believing in superficial structure of materialism. Stories here in the ‘Divine Touch’ section pacify readers with knowledge of great souls of the world, who dedicate their lives for the sake of humanity. The next section ‘Faith’ helps to strengthen belief in the Almighty, thus, making one devoted to Him. The next two sections ‘Greatness’ and ‘Inspiration’ motivate the readers to work selflessly to get solace in life instead of only thinking and chasing after material profits. Historical incidents under the ‘Sparks’ section have been narrated by the author in a lucid way which help readers not only get connected with past glories, but also come to know about various national and international acts of greatness.

Mostly India centric stories, in many cases, Fr. Raj has used first-person narrative style to make the stories more appealing directly to its readers. His final stories, thus, conclude with the message of strengthening one’s will power more to realise and follow the ways of universal truth of life, i.e. selfless service. His very words, therefore, reverberates through the last few lines of the book, “If we want the rainbow, we need to put up with the rain. God is always there with us and for us.”