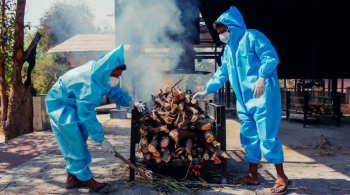 In the midst of the agony and anger, the despair and depression, which have seized millions of people all over the country- there are stories which emerge like embers of hope. These are stories of compassion and courage, of grit and determination, of selfless individuals who leave no stone unturned to help someone in dire straits: the actualisation of ‘Fratelli Tutti’

One such example is of some Muslim youth volunteers helping out in the Khaswadi crematorium in Vadodara. This act of generosity and total selflessness would have continued to be hidden and unheralded; when suddenly in the middle of April some right-wing Hindutva bigots who had gone to the crematorium for a cremation noticed one of the volunteers wearing a skull cap, since it happened to be a Friday in the month of Ramzan. On inquiry the Hindutva- vadis realised that there were more Muslim volunteers helping out, not only on that day, but day-and- night( some of them with very little break) and since a very  long time.  Given their jingoistic ideology, they were unable to tolerate the fact that Muslims were helping out in a ‘Hindu’ crematorium. They naturally raised a hue and cry, which caught the attention of the media. Fortunately some of the wiser among the BJP, diffused the situation which could have turned ugly.

One of the main staffers( a Hindu) of the crematorium in a quote to a daily newspaper said, “This man has been working here tirelessly with us since the last year of the pandemic and for two decades before that… There have been at least 1,000 bodies that have been cremated in this crematorium by Muslim brothers in the last year and no one questioned them because no one was here to see them.”

These Muslims were helping families (total strangers to them) in their helplessness and poverty to cremate a loved one. Because of the COVID protocols very few are even allowed into crematoria; often there are huge lines of ambulances with the corpses, waiting outside a crematorium. Just being anywhere near such a grim reality is more than a nightmare. These volunteers have however braved all odds to help people in distress. They show us that in the midst of hate and exclusiveness, discrimination and divisiveness, one can and must transcend all boundaries specially those of religion. They are the unsung heroes of today! In the ultimate analysis what only matters, is the selfless service and compassion of a ‘good Samaritan’!