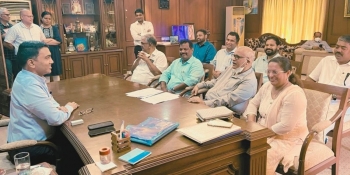 For a country besotted with its plethora of spiritual gurus, it is no wonder that the news of the ‘arrival’ of a new one on the horizon manages to evoke the same sort of response reserved for the more established divinities.

The fondness for gurus and swamis to guide their lives has had people rushing to spiritual teachers who in turn have helped their followers maintain a balanced lifestyle where both their duties to their families and their religiosity have complimented each other beautifully.

This was an accepted practice for the past several decades.

Concepts like seeking ‘Nirvana’ and peace of mind then saw the evolution of a new breed of religious masters who, in the haste to shed their worldly persona, assumed divine demeanours to attract a large ‘clientele’. For, it is nothing less than a marketing strategy that they indulge in to gather a sizeable following.

As an enigma of sorts, the gradual transition from swamis to godmen has further earned them the devoted and unquestioned loyalty of their disciples, besides the colossal empires they have managed to create with the help of their ‘divinity’.

Spirituality is indeed an industry in India and its growth has been phenomenal. The country keeps welcoming new players in its multi-billion religion and spirituality market.

For a quintessential Indian, religion and gods have been necessary compulsions to satiate their ‘troubled’ souls. And when masters combining these impulses initiate followers into their ‘orders’, both are in for a win-win situation.

For eons now the country has been famous for its galaxy of sages who have had some bearing on its religious history. The current corps of spiritual gurus has only added to the mysticism one associates with eminent ‘maharishis’ and ‘yogis’ of yore credited with some of the greatest divine feats the holy texts make us aware of.

With a marketing strategy that could put to shame best of business administrators in leading corporates, these spiritual gurus have been able to build empires and amass fortunes far beyond imagination.

A leading national daily has gone on to express its angst against these fraudsters deeming the last ten to twelve years as a mess for the nation’s ‘spiritual machinery industry’ with the exposure and conviction of a string of India’s self-styled godmen.

Yet it is the blind faith that their followers repose on them that has helped such charlatans maintain their holier-than-thou persona. Holy men and their unholy acts have become a perennial feature of this culture of spirituality which has now garnered a cult following.

Time and again people have been shocked by the atrociousness of the vile acts perpetrated by these ‘Men of God’.

But it is akin to knocking off the ten heads of the demon Ravan -- for every head knocked out, another one sprouts up within no time. No sooner is a fraudster pushed out of reckoning, there is another one vying for the vacant slot! And people showing no remorse accept the new ones unconditionally!

It is as if the need to have one’s destiny guided by these ‘Men of God’ far outweighs any other consideration.

But when a new breed of players decides to descend into the burgeoning spiritual scenario in the country professing to have a one-to-one connection with the Almighty, things do tend to get a bit confusing.

And if these exponents are leading politicians, there is all the more reason to feel flabbergasted! For as much as the spiritual Gurus, it is only a typical Indian political leader who in his own inimitable way can manage to contort facts and is able to see opportunities even in the worst of adversities.

Both have been comparable in the sense that while one manages to convince his ‘flock’, the other very easily succeeds in winning over the confidence of the electorate to post remarkable victories at polls, term after term.

Maybe these traits have helped develop a strong bonding between them. For many times, it has been difficult to imagine the existence of a spiritual leader without the patronage of a political leader – and at times vice versa!

So, this unholy nexus has been a perennial feature of their ‘alliance’ for decades now!

However, for the first time ever, a political leader in Goa, renowned for his political acumen, has now claimed divine intervention. He has suddenly realized that he is blessed with the uncanny gift of conferring with God!

Gaining notoriety as the land of turncoats, the steady exodus of the elected Congress leaders into the saffron-fold for the second time in three years has hardly perturbed the defectors despite the heavy backlash by the affected constituents.

This time around, in order not to have a repeat of the last defection drama enacted, the Congress party decided to appeal to higher powers by having its candidates take oath before the polls to remain loyal to the party after they were elected.

The ‘swearing before the gods’ spectacle was, however, the worst affront by any set of legislators on the electorate in recent times. That tinge of religiosity that the leaders splashed their campaigns with was streaked a shade darker after the fresh round of change in allegiances saw the saffronization of eight Congress MLAs.

It now appears that the switch in loyalty by the senior Congress leader in Goa came after his tryst with God where the Lord apparently gave His divine consent to the legislator to decide on his own course of action!

With the gods too being dragged into the murky politics played out by these power-crazed mortals, who else is being spared the ignominy of their corrupt games?