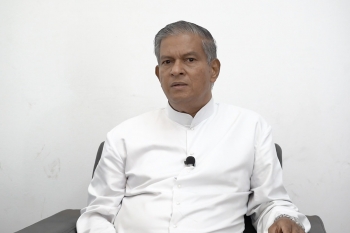 ‘Unfolding of a Scripted Drama’

Monsignor Eugene H. Pereira is the convenor of the Vizhinjam Protest Front. He was present in person when the police opened attack on the protestors on 27th November. In an interview with Fr. Vincent Pereppadan, he narrates the sequence of events that culminated in a brutal police action. According to Monsignor Pereira, it was the unfolding of a scripted drama at the behest of the corporate power behind the port construction. He alleges that the ruling Communist government is playing to the corporate giant’s tune.

Q: Why do you say that the riot-like violence at the Vizhinjam police station was scripted?

A: The warlike violence and terror at Vizhinjam on 26th and 27th November were the result of a conspired script between the ruling CPI (M) and the BJP. They created communal divide and promoted organized fight using the ugliest tactics. There were groups of people deployed to provoke the fish workers who were engaged in peaceful protest. Fish workers’ fight was against the port construction that jeopardizes their life and survival. However, the all-party concocted meeting organized by the oppressor government and their cronies exposed their hidden agenda of victimizing the protestors. The truth should come out. Therefore, we demand a judicial probe into the incidents. We have nothing to hide.

Q: What did really happen those two days?

A: On the 26th morning, a group of women from the neigbouring Pulinkudy village, who were on their way to the protest site, were stopped by a mob which claimed to be port-favouring agitators. They started verbally abusing, assaulting, and physically attacking the women. Some of them who managed to escape from the aggressors reported the bizarre incident to us. They were bleeding and many of them were seriously wounded. Similarly, Fr. Melcon, a pastor of a neigbouring parish, was brutally attacked on his way to the protest spot. He is still in the hospital. Some other pastors were also stopped by the same group and were abused and assaulted. The priests played calm without responding to the verbal and physical attacks. Finally, it was a battalion of police who saved them.

The next assault was at the protest site. We were conducting our protest peacefully at the port gate. However, a group of allegedly pro-port campaigners started provoking the protesting fish workers, especially the women, with abusive language. By around 11.00 a.m. they started pelting stones at the people. Many men and women were wounded. An assistant pastor was stoned down. Still, the protesting fish workers kept calm by avoiding a counterattack. When this provocation continued with repeated attacks, a youth group of fish workers had to chase the attackers away. The massive formation of police force around the place stood silent witnesses. A tensed and provocative situation was built up. It was intentionally intensified by repeated assaults and determined police inaction. Still, the agitated and angry fish workers were calmed and deterred by their leaders from retaliating.

However, on 27th Sunday, by around 2.30 p.m., the shadow police took Mr. Shelton, a quite fisherman and Ward Councillor, into custody for no reasons. His wife who went to the police station was brutally assaulted by the police. Meanwhile, two cases were framed against Archbishop Dr. Thomas Netto on account of the previous day’s assaults while not a single case was registered against the actual assaulters. Interestingly, the Archbishop was nowhere in the scene. Minister Mr. Anil was lying in the media that there were no FIRs against the Archbishop. Police framed several false cases against many of us.

Intentionally, we did not propagate the booking of the Archbishop among the community members as a spark of instigation can have dire consequences of violence. I repeatedly asked the Police Commissioner to release Mr. Shelton on bail from custody even if the police registered a false case attaching Section 307.

By Sunday evening, an agitated crowd that gathered at the Vizhinjam church pressurized the pastor and the council members to demand Mr. Shelton’s immediate release. To deter the angry crowd from violence, four parish council members were sent to the police station to negotiate Shelton’s release. The police response was intentionally provocative. Instead of pacifying them, the police arrested the council members and moved them to the reserve police’s camp. There were no cases against any of them. It was clear that the police were faithfully playing their role in intensifying the provocative and tensed situation already created.

When people in the neigbouring villages learned that the councillors were arrested, many women gathered around the Vizhinjam police station, and they were demonstrating against the unjust police custody of their men. I was faraway in the city at that time. When I got the information, I called the Police Commissioner for his instant intervention to ease the tension. He asked me to rush to the Vizhinjam station to take control of the mob gathered there. While I was rushing to the site, I could see huge police forces deployed all the way. I was told by the police that the officers in the police station were under siege. Therefore, my priority was to release the officers who were trapped inside. However, when I reached there, I could see the police were safe within the compound walls while people were outside the gates. I moved towards the station to help the officers if they were wounded.

Suddenly, a teargas shell fell on my back. A fierce grenade attack was followed. Several grenades were exploded around, and people got scattered and ran for life. Instantly, the police station and its surrounding became a warzone. Before all these attacks started, a group of young men had destroyed the surveillance cameras around that site. Who ordered this police action? Who facilitated this terror? Meanwhile, a battalion of CRPF officers barged into the scene from one side. There were different police forces engaged in grenade actions. The same forces brutally attacked people with batons. Severely wounded women and men were crying for their life. No ministers nor government officials were found around to calm the situation. Therefore, it was clear that they were enacting a pre-scripted riot drama at the behest of the corporate powers.

Q: Were there no peace attempts from any side?

A: My mission at the scene was to calm the angry crowd. The government’s agenda was evident from the sudden police action. It was a premeditated riot drama. Still, we were having dialogues and peace keeping attempts with the district authorities and police officials. I demanded immediate release of those who were kept in police custody unjustly. But the response was violence and police action against the protesting fish workers.

Thousands of villagers were preparing to rush to Vizhinjam. However, I pleaded with the community leaders and pastors to deter those people from the neigbouring villages from retaliation. At the same time, it becomes emphatically clear that the Communist government of Kerala conspired with the BJP and the corporate giant to portray the oppressed fisheries community as anti-nationals and rioters. They wanted the media and the public to carry such a narrative to facilitate the corporate power and to eliminate protesting fisher folks who fight for their life.