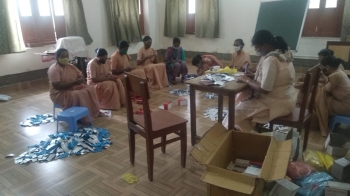 The onslaught of the second wave of COVID-19 and its impact have led to disease, devastation and death. With the uncertainty about the virus looming large, coping with it is leading to frustration and depression. With no proper and adequate information, guidelines and support from the state and central governments, common people are left to fend for themselves.

For more than a year, the citizens, especially 60% of the population from the most vulnerable and marginalized communities, have suffered untold misery and hardships. Realising the seriousness of the situation, some Church personnel in Varanasi initiated an online meeting to take stock of the situation and find out the possibility of responding to this grim situation. A zoom meeting was held with the Conference of Religious of India Varanasi Unit and another meeting with the Bishop of Varanasi. All of us realized that we should respond to the cry of the people for assistance. At least, we need to provide some medical relief at this juncture.

It was also kept in mind that we need to take care of ourselves first and foremost along with taking care of other members of religious, priests and lay faithful.

Starting from March 2020, the Church in Varanasi, along with civil society, provided relief to thousands of affected families. In the first phase, various organs of the Church provided assistance to over 45,000 families and 25,000 migrants. But this time, we realized that it was not possible to go around and do similar relief work. We also realized that we do not have the resources for such a massive work. Hence, it was decided to focus on medical relief that is the foremost need of the people.

Our objective was to a) make people aware of the protocols and invite them to follow whatever is possible; b) to provide appropriate and genuine information from a sea of information available; c) Inform about the home remedies which are easily available; d) Connect those who need assistance to the right source; e) try to explore some medical assistance with our limited resources.

The Diocese of Varanasi works in 8 districts of Eastern Uttar Pradesh which are the most backward areas in the State. We are trying to address the poorest in the slums and villages. Most of the families have only one room with 5 members, hence social distancing becomes a huge issue for them. Lack of proper toilets and bathing rooms, absence of facilities for hot water, etc. add to these problems.

The following assistances are provided:

Awareness creation on following the protocols to protect oneself and family members and others from the spread and effect of the virus. This awareness creation was carried out among the workers, labourers, vegetable vendors, construction workers, etc., who do not have reliable information on the protocols. One of the important protocols communicated was on the need to get vaccination at the nearest government health centre.

Handbills were distributed with information on Home Remedies which are user-friendly and easily available at home. For some poor families, these were purchased and reached. Around 50,000 hand bills were printed and made available for rural and poor masses. It is being translated into 6 regional languages. This hand bill also became medical prescription for them; it is also useful for knowing the price of the medicine. We are grateful to the Bishop of Varanasi Rt. Rev. Eugen Joseph for taking care of this expense.

The second set of the handbills are ready with information on cautions to be maintained; symptoms to be paid attention to; need for obtaining death certificates of relatives died of the virus; government announcements of food distribution for the next three months, etc.

Over 10,000 masks have been distributed among the poor. Some of these masks were stitched in a prison, due to which the prisoners also got some income. With the handbill and mask the awareness level goes high. In the first phase, people were not careful regarding wearing mask.

Now they are ready to wear mask but they cannot afford to buy since shops have raised the price. Our assistance became handy at this critical juncture. Vegetable vendors and cycle rickshaw pullers were also provided with masks. Since they are part of labour unions, it is easy to distribute medical relief materials through them.

Blood Donation Camps were organized. Realising the crisis of lack of blood for Covid and other patients, we approached priests and religious to take the lead in donating blood. Many young persons from other faiths also joined us in this venture. We organized camps at 5 locations and over 50 units were collected. These are given to the poorest of the poor affected by Covid and also for those who need blood but cannot get it. Since we organized the blood donation camp through Popular Hospital, we have some access with that hospital now.

As we proceeded with providing assistance, we realized the need to provide basic medicines for those who have symptoms or tested positive or want to avoid it. We became aware that the prices of the essential medicines have gone up and the poor cannot afford to buy them. We checked the guidelines provided by the central, Bihar, Chhattisgarh and Uttar Pradesh governments and also checked with doctors to arrive at a list which is beneficial for people. We negotiated with whole sale suppliers and got the price reduced and mobilized resources to procure them. Many volunteers worked on the mode of taking the medicine, the prescription and packed in small bags and distributed to the needy people.

Over 2,000 medicine kits have been distributed so far, mostly for the poor and vulnerable, women-headed households, vegetable vendors, rickshaw pullers, daily labourers, etc. These medicine kits proved very useful for the people since they could not afford to purchase it on their own. We are planning to continue this with the support of benefactors.

Inhalation has been suggested as one of the measures to protect themselves and to do away with the virus. For this Eucalyptus oil was found to be very useful. Some of our family members and friends were generous enough to make available the oil. We acknowledge with gratitude the contribution of the Bishop of Varanasi for procuring this in big quantity.

Our efforts right from the beginning have been to provide assistance needed to the most vulnerable population. Though the initiative came from the church personnel, we did not limit ourselves to the Christian community both in terms of providing relief and being engaged in this work.