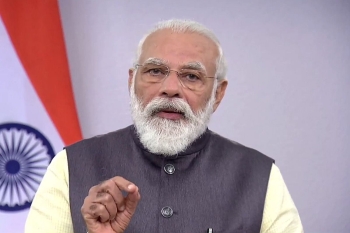 There has been a progression, or rather regression, of Vs over the last week. For those unfamiliar with Hindi, let me first do a literal translation of the 4 Vs in this title – Vikas (Development), Vishwas (Faith), Vilas (Luxury) and Vinash (Destruction).

Vikas has been the buzz word of the BJP Government. There is no doubt that various development works have been carried out, especially in infrastructure like road building and air connectivity. There have also been various welfare measures that contribute to Vikas, like free rations, gas and water connections, housing for the poor etc.

This is where the dichotomy surfaces. The top echelons of the government, like the Prime Minister, highlight their development works. Unfortunately, in the process, they negate all and everything that went before them, with statements like: “Nothing happened in the previous 70 years”; thereby seeking to create a narrative that it is only after their advent that things began to move. It is not my intention to enter into a debate over what previous governments did or didn’t do. In fairness, let us give credit where it is due, be they present or previous governments.

In the 2019 Lok Sabha election campaign, another word was added, “Vishwas”. Politically speaking it would be more correct to translate it as “trust or confidence”. It should be read in the light of the statement “Sabka Vikas, Sabka Saath, Sabka Vishwas” (through development to earn the trust and confidence of all).

Here is where the cookie crumbles. Far from gaining the confidence of all, there is an increasing trust deficit, especially among the Minorities, and all others who do not subscribe to the Hindutva agenda. The sustained attacks and curbs on the meat and leather industries have hit the Muslims the hardest. Then there are pogroms against so-called love jihad and the hijab.

For Christians the one whipping boy is the allegation of forced and fraudulent conversions; with a plethora of anti-conversion laws in the BJP ruled States, euphemistically termed “Freedom of Religion Acts”. This, despite the data from the 2011 Census of India pointing in the opposite direction. The government got a good excuse of Covid to not conduct the census in 2021, as it would have belied the false propaganda.

Another grave concern for the trust deficit is how the Executive has become pliant and the media compliant. The last standing pillar of democracy, the Judiciary, is now under attack from no less than constitutional functionaries like the Chairperson of the Rajya Sabha and the Speaker of the Lok Sabha. “Judicial over reach” is the new mantra to tame it. The elevation of D.Y. Chandrachud as the Chief Justice of India, with a two-year tenure, is probably causing jitters in the ruling party, that wants to clip his wings.

Other than the questionable use of enforcement and spy agencies, another area of concern is the shrewd manipulation of election results. Using both the carrot and the stick, the BJP has, in recent times, formed or is part of the government in several States where it did not win a majority. So much for the will of the people. The table below speaks for itself.

Other than the above, there are some other States in the North East where the BJP has managed to align with regional parties, to hold the reins of government and reign by remote control. How then can one have Vishwas in such a scheming party?

The last straw on the camel’s back, or nail in the coffin, is the last two words – Vilas and Vinash. Readers and viewers would have seen the launch of the MV Ganga Vilas by the Prime Minister on 13th January at Varanasi, his parliamentary constituency. It was hyped as a symbol of a resurgent country to which foreign tourists and foreign exchange would pour in. Now to the fine print.

This cruise ship is not owned by the government. It is owned by Kolkata based Antara Luxury River Cruises, founded by one Raj Singh. It has 18 cabins accommodating 36 passengers. It will take 51 days to traverse the 3200 kms cruise to Dibrugarh, Assam. One round trip would take over 100 days. Discounting the turbulent monsoon season this would mean two round trips in a year, with a maximum of 36x2x2=144 passengers per annum.

The charges are Rs 25,000/- to Rs 50,000/- per head per day, or Rs 20,00,000/- for one trip. Who can afford such charges? We Indians will certainly not spend such sums for floating down the Ganga! An entire family could easily fly off to some foreign destination with that sum of money. Assuming, without admitting, that the cruise runs to full capacity, it will generate revenue, not profit, of just Rs 28 crores per annum. The cost of the boat alone is Rs 98 Crores. The government, on its part, will have spent several more crores on publicity and infrastructure. So, what benefit and to whom?

One more thing. The advertorial that I saw in the Hindustan Times on 13th January mentioned a bar and a multi-cuisine restaurant. The cruise website says that it will be serving Continental food. So, is the cruise serving booze and non-vegetarian food on the sacred Ganga? Alternately, do we expect foreign tourists who have paid through their noses, to survive on sherbet and samosas for 51 days?

Ironically, Raj Singh states that no non-vegetarian food or liquor will be served on board! Whom do we believe? Could this mean that the biryani, kababs and whisky will be served onshore? This entire exercise in showmanship is a fraud on the public with tax payers’ money. A country where many still go to bed hungry can ill afford such Vilas (luxury).

This is also another instance of double standards and hypocrisy. A few months ago, some Muslim youth on a boat in Varanasi were eating chicken. Their video went viral and they were arrested for desecrating the Ganga. So, is there one set of rules for rich Swiss tourists and another for poor Indian Muslims?

Let us now turn to Vinash (destruction) as evidenced in Joshimath and other parts of Uttarakhand, the source of that very same Ganga. The government terms it “subsidence”, a polite way of saying that the township is sinking.

The government is trying to pass it off as a natural phenomenon. The locals are not amused. They insist that this is a direct consequence of unplanned development (Vikas). The major culprits are the Tapovan mega hydro-electric project and the Char Dham (4 places of pilgrimage) whose access roads are being widened into 4-lane highways by blasting the fragile hills. Here too, like the Ganga Vilas, the Char Dham has been showcased as a major achievement of the Modi government.

At the end of the day, of the 4 Vs, Vikas is ill-conceived, Vishwas is lost, Vilas is a mirage and Vinash is imminent. Fellow Indians, awake, read the signs of the times and see the widening fissures, for the Emperor has no clothes!

(The writer is a social activist and civil rights crusader)