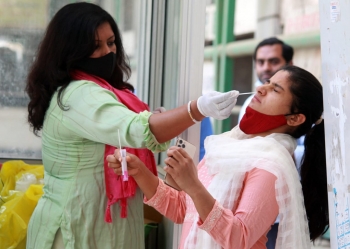 With the second wave of the coronavirus pandemic having pushed the nation to the wall, it is time the government gets over its evasiveness on the matter and comes to terms with the grimness of the COVID situation in the country.

Fears about the graveness of the emerging COVID scenario in the country has been compounded by news that the COVID bed capacity at most of the designated medical centers has reached saturation point.

The alarming figures of recent infections notwithstanding, it is dismaying to have the country continuing to do nothing to allay fears of another devastating rampage by the coronavirus.

Despite warnings by medical experts that the worst is yet to come, is the Centre taking a very casual approach to the whole issue?

The abject failure by the government to enforce strict adherence of the safety norms by the public is indicative of this indifference on the face of an inconceivable devastation.

Let me quote from an article that I came across recently:

“India went into COVID-19 lockdown in March 202, forcing people to take the threat of the illness seriously. A year on, pandemic fatigue has set in, markets have opened up and precautions taken by people have also slackened visibly.”

It is extremely difficult to understand as to how most of the people could be biased to ignore the risks of the pandemic! Is it plain foolhardiness or is there some underlying psychological factor which induces such reactions in the people!

If we are to believe that ‘in the face of uncertainty, we are biased to perceive the world as we would like it to be’, then all the pieces of the jigsaw puzzle would seem to fit in the right places.

We are not ready to accept the fact that we are in a hopeless situation where an invisible microbe has turned our world topsy-turvy. Attributing the daily spike in figures of infections to the overzealousness of an obsessional media that has nothing but the juggernaut of the coronavirus to report about, people continue to feel that it is more of a hype than anything else.

But what we are seeing here is an offshoot of the herd-mentality. “If he can, why not me,” seems to be the motivating factor inducing people to come out in large numbers and enjoy life, the risks posed by the virus notwithstanding.

With such an attitude in evidence it is difficult to see curbs by the government on any activity that could push back efforts by the state to limit the effects of the pandemic prompting people to forgo such detestable habits.

As a predator that can camouflage and strike at will, the virus continues to baffle scientists. The killer virus is mutating and the discovery of the newer strains confirms that the fight against the tormentor-in-chief is far from over.

However, while the level of insouciance exhibited by people is a matter of concern; how long can the excuse of a tottering economy be proffered as a justification by the government for allowing the public the liberty to act in contravention to all the safety guidelines prescribed!

Nevertheless, when it is more than obvious that ‘crowds’ have profusely contributed to the sharp increase in COVID cases, steps should have been taken to nip this issue in the bud.

Given these conditions, opting for the vaccination should have been seen as the one shot to restore normalcy in lives upended by the pandemic.

With the Centre coming out with new proposals to speed up the vaccination drive across the country, the lukewarm response reported is however a matter of concern.

Under these circumstances, the Union Health Minister’s remarks about some states playing vaccine politics and spreading panic among people to distract attention from their failures in dealing with the COVID-19 pandemic only adds to the confusion.

With reports of shortage of vaccine pouring in from some parts of the country, protests from certain quarters against the Centre’s decision to export COVID-vaccine with the demand that the drug should first be made available free of cost to all Indian citizens hence sounds quite justified.

But considering that nearly half of the country’s population is yet to get over its reservations and get inoculated, initiatives like the ‘Tikka Utsav’ mooted by the PM should see a definite change in mindset among people vis-à-vis the vaccination.

As per theories making the round of the social media, safety perception increases risk appetite. That is to say that people become more careful when they sense greater risk and less careful if they feel more protected.

It would however be wrong to contend that people in India have been getting lax in following COVID appropriate behaviour due to a false sense of security from vaccines considering the general inhibition shown for getting vaccinated.

But generally speaking, the theory, as far as India is concerned, could well be flung out of the window. No matter what the risk, people have been endangering others by their irresponsible behaviour.

But is it any different in other countries! Wearing masks, social distancing and washing hands frequently appear to be compulsions that the masses are willing to oblige the administration with.

Though earning bread and butter is important, saving lives in these harrowing times should gain precedence over everything for the government.

However, it is rather unfortunate that no state has been thorough in its pandemic preparedness and continues to experiment with ‘strategies’ to contain the spread of the disease in an impulsive manner.

This is no time for state governments to engage in COVID diplomacy. Every government, without exception, needs to show urgency on the matter. Galvanizing all resources, state administrations should ensure the disruption of the transmission of the rampaging virus.