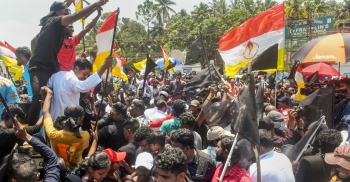 VIZHINJAM PORT PROTEST: Port of Future and Future of the Fisher

Vizhinjam, the capital of Ay Kingdom that ruled between 7th and 11th century AD, having the territories extending from Nagarcoil to Thiruvalla, later became the hub of a fort and a port. The historical port at Vizhinjam initially hailed as the ‘port of the future’ on account of its proximity to the international ship route has now become the ‘port of controversies’.

Fisheries are an important source of food, nutrition, employment, income and above all constituting livelihood to fishers. Fish is one of the affordable options to mitigate hunger and malnourishment. India has rich and diverse fisheries resources ranging from deep seas to lakes, ponds, and rivers. It has more than 10% of the global biodiversity in terms of sea fish and shellfish species. The marine fisheries resources are spread along the country’s vast coastline, exclusive economic zone and continental shelf area.

Under the Constitution of India, Fisheries is a State subject under Entry 21 of List II. States play a pivotal role in fisheries governance. Under the guiding principles of co-operative federalism, Centre complements the efforts of the States in this arena. Inland fisheries are fully managed by States. Marine fisheries are a shared responsibility between the Centre and coastal States. In the sea waters inside the 12 nautical mile (22 km) territorial limit, coastal States have jurisdiction, whereas in respect of fisheries in Exclusively Economic Zone waters beyond 12 nautical miles and up to 200 nautical miles (370 km), the Centre is responsible.  Centre and States are committed to ensure sustainable and responsible use of the marine resources.

The National Fisheries Policy, 2020 framed by the Centre is intended to offer a strategized way forward to develop, harness, manage and regulate capture and culture fisheries in a responsible and sustainable manner. The national aspirations and the development goals set before the nation through the policy asserts the socio-economic upliftment and economic prosperity of fishers and fish farmers’ and holds traditional and small-scale fisheries at the core of the Policy.

To meet the compelling demands that fulfill the requirements of today and leaves an equally better fishery for tomorrow, the Policy asserts that it is necessary to develop a sound framework, based on the principles of equity and equality and adopts a people-centric and participatory approach; mainstreams gender, and maintains inter-generational equity.

One shall not ignore that fisheries have commenced as a purely traditional activity, though now it has almost transformed into a commercial enterprise. The Policy, in fact, recognizes that marine fisheries sector is dominated by the socio-economically backward and small-scale fishers whose lives are closely intertwined with the oceans and seas and that the dependency of traditional marine fishers on marine capture fisheries for livelihoods has been increasing.

The vision of the Policy is to develop an ecologically healthy, economically viable and socially inclusive fisheries sector that contributes towards economic prosperity and wellbeing of fishers and fish farmers and thereby provide food and nutritional security to the country. It has the mission of improving the livelihood of artisanal and small-scale fishers through appropriate strategies in a participatory manner.

The beach front and the sea coast play a crucial socio-economic, cultural role in the lives and living of traditional fisher communities. Historically, they have evolved an intimate relation with particular stretches of coastline that they use, that is in front of their settlement and extends on either side. Its boundaries are separated traditionally, geographically and culturally.

Observing the sea and its conditions using the traditional knowledge is an essential part of the preparation and planning that fishermen undertake for their fishing activities. Fishermen naturally require residence in close proximity to the sea, to have unimpeded view of the sea.  Relocating landwards is seen as an inherent threat to community’s nature and customs.

The access and visibility of the sea is critical for fishermen as part of their decision-making, basic livelihood activities such as launch of boats, laying of shore seines, drying of fish, mending of nets, berthing of boats. Sea shore has also social functions for the community like sports, leisure, meetings, and cultural festivals. These are the fair use of coastal shore area by the villagers and this extends far beyond their actual areas of settlement.

The fisher people have been the traditional inhabitants of the coast. Their occupation of the land adjoining the sea was entrenched in their association with the sea. Being close to the sea is critical for their livelihood. They may not always have title for the land and housing that they occupied. They may have to change residence across the coastline in different seasons.  Still their right of access, use and control of coastal space is recognized as integral to coastal governance.

Development projects always have lasting negative impacts on coastal environment and traditional rights of fisher. Coastline is now becoming a contested space. Development activities mainly aimed at the growth of the economy is putting pressures on the coastline.

The livelihood concerns of the coastal communities are easily forgotten. The rights of the fishers are being deprived. Their first right over the coast is seldom taken into care.

Transferring the traditional ownership of and access to beach fronts from fisher communities to private entrepreneurs with commercial interest and pushing back the dwelling places of the fisher communities to the landward side of the line would prove to be fatal and a brazen attempt to disempower the traditional fishermen communities.  When they require extra land and space for the future expansion of their settlements, could it be denied or deprived of under the guise of development is the question being raised?

Bottom-up approaches with fishermen community at the centre is the need of the hour, instead of embarking upon top-down policies. The displaced fishers have to be resurrected by taking them into confidence and by extending just and equitable compensation for the loss suffered. Establishing an independent, impartial, transparent and accessible adjudicatory mechanism to hear them and to provide just solutions on their grievances may win their hearts.

There is no dispute that coastal area development is necessary for meeting the goals of the Blue economy. But it shall not be at the cost of the rights of traditional fishermen. Improved livelihood has to be ensured without affecting the existing livelihood. Fisheries resources are the common heritage of the mankind and its aesthetic value has to be preserved. Vizhinjam inhabitants require a permanent solution and it must be just and fair. Their traditional right to fish in historic waters cannot be usurped; it has to be protected and equally balanced against economic interest. Governments are duty bound to ensure meaningful fulfillment of their rights.

(The writer is a prominent lawyer, an acclaimed writer and a distinguished academician based in Kochi)