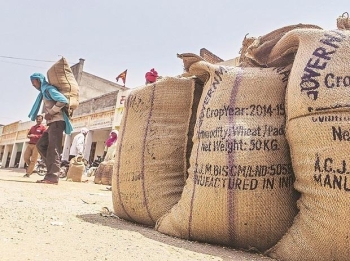 Wake Up Call on Corruption

At a time when the Central Bureau of Investigation (CBI) has reportedly registered FIRs against some 52 officials of the Food Corporation of India (FCI), for alleged criminal conspiracy as well as corruption, it is noteworthy that the Union Minister of Consumer Affairs, Food & Public Distribution, Mr Piyush Goyal, too has urged FCI to adopt a policy of zero tolerance on corruption and also institutionalise a mechanism to reward whistle-blowers.

Set up in 1964, the mandate for FCI is to ensure food security for the citizens, efficiently procure food grains at minimum support price, besides maintain buffer stocks and arrange for its distribution. The FCI was in all praise for effectively handling the world’s largest food supply chain system, especially during the COVID-19.

Despite an increase in its workforce, probably, lack of an effective oversight policy has seemingly posed several challenges to FCI, most importantly being the cancer of corruption. Evidently, as studies have shown, people typically do not wake up one morning and suddenly decide to become corrupt. There could a host of factors but personal greed surely plays a major role  in so far an individual is concerned.

For instance, following complaints of illegal demands made by some FCI employees for clearing pending bills, when CBI laid a trap in 2021, four employees fell into it.

An Assistant grade employee was found to possess about ₹3.01 crore in cash, gold jewellery weighing 387 gm and 670 gm silver. In all, four FCI employees including a Divisional Manager and an Accounts manager were apprehended for allegedly collecting ‘bribe money’ from service providers like Security agencies. The ill-gotten money was lent at 2 per cent interest to businessmen like builders.

Some six months ago, CBI launched ‘Operation Kanak’, an undercover initiative, to identify suspects in the syndicate of officials, rice mill owners and middlemen, among others who were allegedly indulging in corrupt practices in FCI. Going by news reports, the crackdown has brought to light how corruption was channelised in procurement, storage and distribution. FCI officials are said to have shown more procurement on paper than what was available in godowns. The accused officials allegedly received bribes from silo operators and rice millers for extending favours during the tendering process.

The brazen malpractices committed by an alleged syndicate of FCI officials and millers unravelled by the CBI is mind-boggling. Following the arrest of a DGM-level FCI officer in Chandigarh for allegedly receiving a bribe of Rs 50,000, searches at 50 locations in Punjab, Haryana and Delhi yielded Rs 80 lakh including Rs 10 lakh cash from a female officer who had hidden the money inside a washing machine.

As many as 74 persons (34 are serving officials, three are retired, 17 private persons and 20 entities) including an Executive Director level officer, have since been booked by the CBI.

The FCI personnel on the ground level allegedly charged a fixed amount for each truck loaded with substandard food grain stored in private rice mills and warehouses to be procured by the FCI.

The money distribution for each truck loaded with substandard grains was Rs 1,050. Out of the bribe money, Rs 200 went to the General Manager, Rs 50 for each of four Deputy General Managers, Rs 20 to Research Officers in the laboratories and Rs 100 to an Executive Director posted in FCI, headquarters, in Delhi (He and his wife also allegedly received Rs 10 lakh and Rs 5 lakh respectively to avoid blacklisting a rice mill for low quality rice supplied).

It is interesting that the Parliamentary Standing Committee on Food, Consumer Affairs and Public Distribution, in its Report on Procurement, Storage and Distribution of Foodgrains 2020-21 laid in both Houses of Parliament in 2021 had among others observed that “corruption in FCI may spiral out of control if strict action is not taken”. It recommended that FCI should strengthen its vigilance mechanism in coordination with the States/UTs so as to detect corrupt practices by FCI officers and take stringent punitive action against them, if found guilty. Maintaining that senior officers should be held accountable to uproot the evil of corruption, the Committee suggested that the Public Distribution System should be made more transparent and accountable. Further, the FCI staff should be transferred after a fixed period to avoid creation of vested interests.

So, in dealing with corruption, research shows clearly that the chance of being caught is a vastly more effective deterrent than even draconian punishment. At the institution level, there is an imperative need to fast track cases of corruption and ensure they are taken to their logical end.