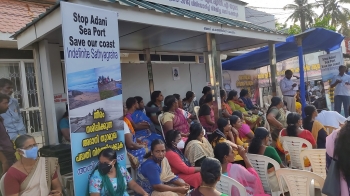 “Officer, I can’t breathe!” It is a cry that the world cannot forget. It was the last uttering of George Floyd on May 25, 2020, when he was made to kneel by a police officer who pressed down George’s neck with his knee on the parking area of a store at Minneapolis in Minnesota, USA. The officer was responding to his mere suspicion when someone at the store reported a $20 bill missing. It took hardly seven minutes. George Floyd’s body lay dead under the iron knee of racism, prejudice, discrimination, slavery, and white supremacy. There was only one reason for George being denied of his breath: THAT HE WAS A BLACK MAN. However, Floyd’s cry echoed in millions of Black Americans and Black communities across the world. They realized how they have been made breathless in history. They made the world hear their voice, “we want to breathe!”

A similar cry for survival is echoing from Kerala’s fishing village of Vizhinjam in Thiruvananthapuram coast. Tens of thousands of people have been gathering there at the entrance of Vizhinjam International Transshipment Terminal under construction there for their right to survive. The Latin Archdiocese of Thiruvananthapuram is leading the protest strike. Most of the fishers are Catholics and 80% of the people of the archdiocese are fishers. The fishery coasts of the Arabian Sea, especially along Thiruvananthapuram and Kanyakumari districts in Kerala and Tamil Nadu, are the most densely populated areas in the country. Therefore, any protest in the coastal area makes massive ripples of human outcry.

Now, the fishers are literally saying that they can’t breathe. They can’t breathe because their shores are being eroded drastically since the port construction began in 2015. Their breath is lost when their houses have been washed away by the violent Arabian Sea. They feel suffocated because the displaced 336 families have been packed into a hell-like cement storage shed for seven years with no alternative yet provided. They lose their breath because the coast depletion escalates in the adjoining villages as the port construction progresses. Finally, they can’t breathe because their sea becomes so impoverished and the waters violent day by day. Therefore, they cry out from the port entrance, “we can’t breathe!”

The Vizhinjam container transshipment port under construction is about 15 kilometers away from Thiruvananthapuram, the capital city of Kerala. An existing fishing harbor built in 1970s facilitates the fishers of the neighboring villages to use larger boats for deep-sea fishing. The idea of a transshipment port at Vizhinjam was first proposed by the Congress-led government in 1995. Although it entered a contract with a private Hyderabad-based consultancy, it was aborted. Later, in 1999, the Communist government attempted to renew the project on Build-Operate-Transfer (BOT) with the same agency. This time, they couldn’t find a prospective bidder and it went to the freezer again.

Meanwhile, an orchestrated campaign promoting the project has been filling media and air proclaiming its huge prospects.  It was propagated that the port would transform Thiruvananthapuram’s future by bringing large foreign exchange, business development opportunities, and permanent job opportunities for fishers’ family members. On the contrary, studies released by different agencies such as International Financial Commission (IFC), Ernest and Young Ltd., and the Comptroller and Auditor General (CAG) of India in 2015 revealed the unviability of the project and warned of the deep and irreparable environmental and socio-economic impacts that it entails. Since Vizhinjam was classified as an environmentally vulnerable spot, the port project was denied of the central government’s environmental clearance. Ironically, the project was tendered hurriedly while two cases challenging the project were pending with the Green Tribunal in its Delhi and Chennai Benches in 2015.

Adani Emerges as the Port Builder

Various reports on the Vizhinjam port project indicate that no port operating corporates responded to the Kerala government’s tender invitation. However, Gautam Adani’s company, multi-billion corporate that emerged after Modi government’s support, mysteriously took up the project. It needs to be emphasized that all the terms and conditions are in favour of Adani’s interests. According to the protestors, the company has been given a free hand to develop the real estate created in the sea with the dredged sediments. When the construction began in 2015 December, the promoters proclaimed that the port will be operative in 1000 days. However, the fact remains that the project has not reached one-third of completion even after seven years of its commencement.

According to Coast Watch, an NGO that studied the beaches of Trivandrum coast, while various agencies declined, the then Chief Minister Oommen Chandi personally met Adani offering a viability gap fund of Rs. 1635 crores and 300-acre land including a 165-acre real estate created out of dredged sediments. The total project cost was estimated as Rs. 7,525 crores in which 75% will be provided by the state. It is pointed out that the non-refundable viability gap fund is much more than Adani’s share. Consequently, Adani has no cost but only profit in port construction. Moreover, according to the contract, the government must construct the groins.

The returns from the port to the government is to the tune of one percent of the profit after 15 years. In addition, the transshipment company is entitled to get a termination fee of Rs. 7,000 crores if it aborts the project before or after the 40-year contract period. Although the project should have been completed in four years, the government has not moved to penalize Adani’s company for their delay in completion.

Thousands of fishermen, women, and children are protesting at the port entrance raising seven demands. They want a permanent solution for the beach erosion due to the Vizhinjam port construction. Families that are languishing in the temporary shelters and rented sheds should be given decent living spaces. They demand an equal and sufficient compensation to those who lost their houses and land properties. All the port construction activities should be stopped, and the government should initiate a scientific study on the beach erosion by a team comprising scientists and local people. The fishers should get kerosine at subsidized prices as before. They should also get a compensatory minimum wage on their unproductive days due to unfavorable weather. There should be adequate measures to prevent the repeated disasters at the unscientifically constructed Muthalapozhy harbour.

Erosion of large areas of seashore in Kerala is a recent phenomenon. Studies show that a process of continuous sediment transportation due to powerful undercurrents moves the seabed sediments from North to South in June-August while the reverse movement happens in September-April. The recent constructions of breakwaters and groins have prevented the free deep-sea sediment movements. Consequently, Trivandrum’s northern fisheries villages have experienced shore depletion while the southern villages have shore accretion. The fisheries harbour has a 400-meter groin while the transshipment port’s groin is one kilometer into the sea and two kilometers parallel to the coast. As the protestors indicate, the groin construction prevents the natural phenomenon of annual sediment transportation resulting in sediment accretion on the one side and shore depletion on the other. Furthermore, this intervention in the seabed drastically affects the rich biodiversity of the ecosystem.

Immediate impacts on the sea behaviour and social displacement are visibly seen in the northern villages of Vizhinjam project such as Panathura, Poonthura, Beemapalli, Valiyathura, Sankhumukham, Vettukadu, Veli, and Thumba. Hundreds of households have been washed away by the violent sea. Fishers who use dragnets from shore lament that a vast area of seashore has been lost, and along with it their livelihood. Many more houses are at the verge of being washed away. People who lost their houses have been accommodated either in the neighbouring villages by their relatives or in the temporary shelters provided by the government. Till date there are no known rehabilitation plans for those lost houses, properties, and livelihoods.
It is reported that the rocks required for the port and groin construction are extracted from the Western Ghats. The protestors allege that the government has freely handed over four huge quarries to the Vizhinjam International Transshipment Port Ltd. and as a result the environmentally vulnerable Western Ghats will have to face another disaster of mountain depletion.

Coastal Watch further informs that in four zones along the entire coastal land, while zone one (Pozhiyoor to Adimalathura) has been experiencing large amount of beach accretion, all other three zones (Panathura to Edava) have been experiencing large amount of beach erosion in the last seven years following the port construction. While many agencies including that of the government alerted the authorities about the serious consequences of these erosions and accretions, two national agencies such as the National Green Tribunal (NGT) and the Indian National Centre for Ocean Information Services (INCOIS) gave a false affidavit at the honorable Supreme Court claiming that there was no beach erosion. The study alleges that the favorable report was made at Adani’s behest. Since the unscientific groins and breakwaters apparently seem to protect the beaches locally, the study says, there are people’s uproar for such localized constructions. However, the groins make the beaches useless for traditional fishing and habitation. Therefore, the study strongly urges to stop all solid structure constructions in the beaches and the sea.

Unfortunately, the Vizhinjam port construction project has not considered the aforesaid natural sediment transportation and erosion. In addition, the transshipment channel will make the entire area of Vizhinjam and the neighboring fishing villages a no-fishing zone and no-fishing coastal area. This would create a massive displacement of the fishers’ communities from the area. Where will they be accommodated and what livelihood would ensure their survival remains an unasked and unanswered question.

Fishers’ communities are now out on the streets. They raise their demand and right to breathe. They say it is their last cry and fight for survival. Archbishop Thomas Netto of Trivandrum Latin Archdiocese while inaugurating a demonstration and rally at the state capital declared his readiness to sacrifice his life for the cause of his folk. He further warned the authorities that he would shift his residence to the protestors’ venue at the port entrance if the authorities were pretending deaf. The Archdiocesan leadership is steadfast in their stand. They are determined to fight. Although some slogans such as anti-development, anti-national, and foreign funding are raised against the protestors, they would not catch fire as the fishers’ is a struggle for their survival. A negotiation at the ministerial level failed completely as the demands were not fully met. The protestors are looking forward to a decisive step by the Chief Minister in favor of the protesting community.