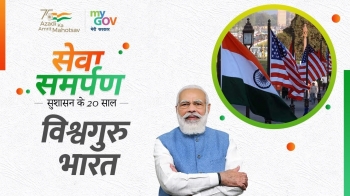 Who is Pundit and Who the Chela?

“Donald Trump and the MAGA Republicans represent an extremism that threatens the very foundations of our republic.”  Joe Biden, September 2, 2022

In the halcyon days when cricket journalism was still a fine art that brought the game alive and provided more joy than facts about the cricket, the scholarly journalist, K.N. Prabhu conceived of the perfect metaphor to describe Salim Durrani’s prowess when he pronounced him “the poor man’s Sobers”; possessed of a similar skill set and style but performing with not quite the same distinction as Sobers. It was a delightful play with words that powerfully conveyed what he meant.

I was reminded of the Durrani-Sobers analogy on reading the Vishwaguru’s recent Independence Day address to the nation. I was struck for the umpteenth time by the uncanny similarities between him and Donald Trump. So close is their affinity that, unlike in the Durrani-Sobers comparison, it is almost impossible to discriminate between these two consummate showmen and tell the master from the doppelganger.

The Vishwaguru commenced his Independence Day oration by evoking the tricolour which, at his urging, was ubiquitous at every conceivable location in the country -- in homes, in offices, in schools and just about everywhere else. In like vein, flaunting and even embracing the American flag has been Trump’s studied method of showcasing his patriotism and love for his country. Similarly, by invoking “India First” and “Atma nirbhar Bharat”, the Vishwaguru drummed up the desi version of the trumpery slogans of “America first” and “Make America Great Again (MAGA)” propagated by Trump.

Ersatz patriotism is not the only characteristic that these two leaders share in common. Trump as President presented a perverse right-wing view of American history, excoriating academia for focusing on slavery and racism in American history and denouncing rallies against racial injustice as the “direct result of left-wing indoctrination in our schools.” He even set up a new 1776 Commission in 2020 to “promote patriotic education”, with the obvious intent of rewriting history to suit the purposes of his right-wing, racist constituency.

The Commission submitted its report -- “filled with errors and partisan politics” according to leading historians -- two days before the end of Trump’s term, but, thankfully, neither the Commission nor its historical fiction survived his Presidency.

In our frail democracy, the Vishwaguru has been effective in falsifying history, abetted by his minions in key positions across the educational spectrum. From the ramparts of the Red Fort, he barefacedly presented an alternative reading of the Freedom Movement, expunging Jawaharlal Nehru and including Savarkar in the elite pantheon of four leaders who spearheaded our freedom struggle. Ironically, reinforcing his flight of historical fancy but much to the outraged amusement of those with a modicum of good sense, came news that in Karnataka, the recently revised history school texts have glorified Savarkar, stating, inter alia, that during his incarceration in the Cellular jail, “bulbul birds used to visit the room and Savarkar used to sit on their wings and fly out and visit the motherland every day.” The irrepressible Aakar Patel said it for us when he wryly tweeted, “always knew he was a lightweight."

Another point of comparison between the two leaders is their hardened right-wing populism, both adept at fanning passions along religious and other social fault lines. Although Trump has claimed that he “is the least racist person you have ever encountered”, he has made explicitly bigoted statements, stretching from calling Mexican immigrants criminals and rapists to proposing a ban on all Muslims entering the US, and pandering to white supremacists and the Ku Klux Klan after they held a violent rally in Charlottesville.

Here, behind the beguiling slogan of “Sabka saath, sabka vikas, sabka vishvas,” the Vishwaguru -- except during electioneering when the sneering rhetoric against Muslims is wickedly straightforward -- expresses his polarizing and communal credo through dog whistles and oblique references. In his Independence Day speech, his assertion that “no part of India or no time period remained untouched by the freedom struggle against centuries of slavery” slyly slots the period of Muslim rule as predatory and alien. He tethers the country to its Hindu roots: “How can we not be proud of this heritage? We are those people who see Shiva in every living being…who see Lord Narayana in every man…who see the divine in the plants…who see Shankar in every stone… This is our power.” Not a word on secularism or religious tolerance which are under assault like never before!

The personification of overweening narcissism, Trump is infamous for portraying a grandiose sense of self and his accomplishments.  He has touted the development of the vaccines as his personal achievement: “I’m the father of the vaccine!” But the truth is that he was personally culpable for a series of missteps including inordinate delay in imposing travel bans, trivializing covid testing and mask wearing, dismissing the virus as a seasonal flu, even claiming that injecting bleach could treat the virus. For months, Trump was in psychological denial, insisting that the problem was under control, though he did later admit that he “wanted to play it down” as he didn’t want people to panic. They didn’t panic; they died.  The U S with just 4 percent of the world’s population accounted for over 20 percent of all confirmed cases and deaths during his tenure as President.

Much more measured in fakery, Trump’s alter ego did not miss the opportunity to boast on Independence Day: “When the world was in a dilemma, this is the country which crossed the target of 200 crore vaccinations in a time-bound manner and broke all the previous records.” What previous records? One recalls the Vishwaguru preening before the world and taking fulsome credit for “saving humanity” when, in fact, he was personally responsible for decisions that fueled the spread of the virus -- the sudden lockdown and resultant migrant crisis (a World Bank report estimated that 40 million migrant jobs were impacted/lost in India in April 2020), the holding of the Kumbh Mela, the elections in five States and the ill-timed export of vaccines. He went missing when our people were choking for want of oxygen and the spectre of death was everywhere. The tragically sub-optimal pandemic response resulted in a death toll of 4.7 million up to the end of 2021. And yet, in his Independence Day speech, he patted himself on the back for exemplary Covid management.

The two leaders clearly share much in common, but there are marked differences too. Trump has never shied away from the press whereas the Vishwaguru has not faced a single press conference. Trump’s private life is an open book that does not make pleasant reading; the Vishwaguru’s personal affairs are cloak-and-dagger secrets. At a time when Trump is besieged from all sides by criminal and civil suits, the Vishwaguru presents a squeaky-clean image with potential skeletons in the cupboard waved away by the courts of justice. Even Gujarat 2002 has reached a satisfactory closure, with the dismissal of the Zakia Jafri case by the Supreme Court and the remission in the sentences of the 11 convicts in the horrendous Bilkis Bano case.

Both leaders hold their legions of followers in thrall by projecting grandiose omnipotence and distracting them from bread-and-butter issues with unrelenting theatrics. They stoke the psychic pathologies of their devotees arising out of socio-economic deprivation and create an emotional bond and a blind faith that are steadfast even when the leaders’ actions harm them personally.

Despite our country’s nightmarish plight – raging unemployment, crushing inflation, communal discord, grave external threats – the Vishwaguru maintains his stony autocratic imperturbability. His Independence Day speech was a stunning exhibition of delusional grandstanding. Perched atop the Red Fort and the godawful mess that he has created, he gave full vent to his imagination, spouting forth about our “collective consciousness”, the unfolding “renaissance”, and a world awe-struck by our “political stability, dynamism in policies, speed in decision making, universal trust.” Looking ahead, our tinsel visionary even drew up a roadmap to 2047.

Why have we as a nation feted such chimerical nonsense? It is not only an insult to our intelligence but even worse, mocks our travails. Sadly, we have asked for it! Some time ago, a leading psychoanalyst explained the blind worship of our visionary with a story that bears repeating.

A Rabbi in a Polish village had acquired a reputation for being a visionary, but a sceptical journalist decides to travel to the village to check the veracity of the Rabbi’s visionary gift. Asked to prove what is being claimed by the villagers, the Rabbi climbs to the roof of his house and peering into the distance, loudly proclaims that a huge fire has broken out in another village 50 miles away. The journalist hurries to the other village where he finds that there has been no fire. He returns to the Rabbi’s village and informs the villagers that contrary to what the Rabbi had said, there was no fire in the other village. “So what?” the villagers chorused. “It does not matter if there was a fire or not. Aren’t you impressed by how far he can see?”