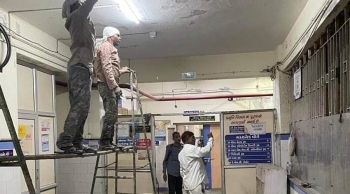 A recent cartoon says it all. It has gone viral on social media depicting Prime Minister Modi being humbly requested by a poor man who says, ‘Sir, I don’t want anything. You just visit the hospital in our village.’ In the background of the Morbi disaster and Modi’s visit to the hospital where the injured were getting treated, this short request was evidently an indictment.

One is reminded of R.K. Laxman, Shankar Pillai, Abu Abraham, Mario Miranda, Satish Acharya, Maya Kamath and a host of other India’s illustrious cartoonists who said little but delivered much through sketch descriptions of our national charcoal characters. These characters were, more often than not, such politicians who spoke much but delivered little.

Modi’s recent visit to the hospital at Morbi was preceded by quick daub on walls, installing water coolers, arranging wall partitions and ceilings, replacing cobweb corners with acrylic splashes, very similar to a marriage hall arrangement. A news item in Hindustan Times quoted a remark: ‘Morbi hospital is being painted overnight so that the poor condition of the building does not get exposed tomorrow during PM Modi’s photo shoot.’

Modi’s recent visit to a school in Gujarat as part of election propaganda had evoked comic reactions from the general public. A section of the media pointed out: Look there, Modi Saheb is sitting as a backbencher with a dozen schoolchildren under the glare of the camera. A comedian quirk wondered if the PM had not learnt a lesson all these years which prompted him to start literacy classes from the start. Some who saw sit in the open media just remarked: ‘Oh, what a photo op!’

Expect a visit from the PM or the CM to your area. You can be sure, prior to their visit, a host of characters such as contractors, road rollers, engineers, road repairing personnel and tube-well diggers swoop in on the area for instant window-dressing operations.

Roadside lamp posts get ‘lighted up’, street gutters get covered with mud and bitumen, roadside nonperforming tube wells get repaired for water supply, new daub of painting on the walls of some buildings, etc. This is the usual ritual that goes on before a VVIP’s visit.

This India where anything can happen like replacing acts of fraud with Acts of God! The VVIPs often come air-lifted so that they don’t get a gutter fall feel if they were to come by road. On arrival, like Laxman’s cartoon characters, they foul the air with promises along with sound pollution and make a hasty exit. Soon after their exit, the primrose promises and the effect of hasty repairs evaporate into thin air.

I call it a cancerous disease that has eaten into the very marrow of our political system. Has anything changed since Rajiv Gandhi remarked during a visit to drought-affected Kalahandi district in Odisha in 1985 that, for every rupee targeted towards welfare programs, only a fraction, 15 paise, reached the intended beneficiary? What has changed is the worsening of our mindset where we do not only cover up such misdeeds but also wax eloquent like praising the fall of the rupee and the rising of the dollar sky high.

We may even have the foolhardy villainy to say that even a man-made disaster is a tragedy, Act of God.  The fraud element is covered up with instant over-coating of justifications or transfer of some petty officials, gate keepers and ticket sellers. The nation gets a shiver down its spine hearing the dastardly statement of the defendants in the Morbi disaster. The defence argument by one of the Managers of the company namely Deepak Parekh before the court of the Chief Judicial Magistrate M J Khan was that the bridge collapse was ‘Bhagwan ki ichcha’ (God’s will).  Whereas, the police, in their remand, which was submitted to the court, pointed out a series of failures by the contractor, such as not replacing rusted cables and couplings, lack of safety measures, non-qualification of the contracting company for the task of renovation of the 140-year-old bridge etc.

Ducking under Act of God argument, when there is evidently criminal irresponsibility, is in itself a criminal offence. There have been similar instances of such justifications. In 2016, when a portion of a flyover in Kolkata collapsed, the builders had argued that it was an Act of God. In Delhi’s Uphaar Cinema hall tragic fire accident, which claimed 59 lives, the cine owner had argued before the court that the disaster was an accident, an Act of God.

Many things are talked about in the name of development. Many promises are made only to be broken thinking that the public have a short memory. More than short memory, it is lethargy of the public in donning their thinking cap. Many do not want to face consequences from the Big Brother. Where freedom of speech is a casualty, the fear of the midnight knock forces many to keep their breath to cool their morning cup of coffee. The fate of those rotting in jail for their freedom of ex

Instead of owning up responsibility in times of foolhardy performance which causes disaster or destruction, many leaders or bureaucrats shift blame on junior officials or try to walk away with evasive answers. It is time the gentry of the republic begin to ask questions and demand that the jokers own up responsibility.