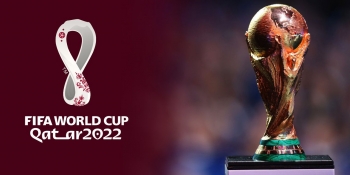 Brutal racism, arrogance, exploitation of labour and resources of subject nations have been the salient features of the imperialist project. The predatory West is culpable for many of the most inhuman practices and injustices that disfigure human history. And yet, as Edward Said had observed, it seeks to paper over its own inhumanity by disregarding, essentializing and denuding the humanity of other cultures and people. Decolonization has not blunted the West’s obscene moralistic triumphalism and arrogance. On the big stage, wherever, there is an unabating crusade to contrast the civilized liberal West and its traditional commitment to human dignity, freedom and progress with the barbarism and obsolescent thinking in the Orient. Bah!

This ill-tempered prelude has been provoked by the cold, calculated rapacity of the West-dominated opinion makers and their hypocritical attack on Qatar, the venue of the greatest spectacle on earth – the FIFA World Cup. Their malevolent criticism revolves around a range of issues including the ban on sale of alcohol during matches, Qatar’s anachronistic LGBTQ policy and the treatment of migrant labourers involved in the construction of the stadia and other infrastructure for the World Cup, which their media has sensationalized by calling it “a stain on the conscience of the footballing world.”

The widely reported maltreatment of migrant labour in Qatar, drawn mainly from India, Pakistan, Bangladesh, Nepal and Sri Lanka relates to squalid accommodation, delayed payments, withholding of passports, inadequate nutrition, exposure to extreme heat and nationality-based discrimination. In the 12 years since the construction work started, there have been about 6750 migrant deaths due to on-site accidents and illnesses associated with the work environment. This is most definitely an unacceptably high number of deaths, but then, to quote the immortal biblical cautionary injunction: “Let him who has not sinned cast the first stone.”

The West’s sanctimonious criticism of the treatment meted out to migrant labour in Qatar is stunning in its hypocrisy. The construction industry, a critical part of the economy of most countries, is recognized worldwide as the most hazardous of industries. A European Union Expert analysis has concluded that construction workers everywhere are three times more likely to be killed and twice as likely to be injured as workers in other occupations.

By its own admission, in the European Union, more than 1000 workers are killed and over 800,000 workers injured every year in work-site related accidents, which makes their criticism of Qatar untenable -- a phoney case of, at best, the kettle calling the pot black. Being slightly less reprehensible than the reprehensible does not make you a good man. The abysmal condition of construction workers is a universal blight which needs to be addressed, but certainly not by picking on one of the many defaulters, especially when the gratuitous criticism does not stem from an intent to improve matters but is aired merely to tarnish the image of Qatar at a most critical time.  It is an ugly extension of the age-old culture war between the Muslim and Western world, with all the megaphones controlled by the West.

One is amazed by the sheer gumption of the Western world to raise the issue of ill-treatment of migrants. To be lectured on humanism by those guilty of the worst excesses against humanity is jarring. Have they forgotten the three-year-old Syrian toddler, Alan Kurdi, washed up on a beach in the Mediterranean, lying face down in the surf -- a heart-breaking image that is a scathing indictment of the inhumanity of a heartless Europe?

It was that great lady Angela Merkel, the German Chancellor, who jolted the European Union out of its awful apathy with her determined intercession, “Wir schaffen das” meaning “We’ll manage this (refugee influx).” Even as she sounded this noble humanitarian note, Hungary sent trainloads of refugees to Germany, 20000 of them arriving at the Munich station the same week, and scores thereafter. The burgeoning gang of rightists -- racists by another name – led by Donald Trump, called her humane gesture “a catastrophic mistake” but despite the sustained and high-octane campaign, including severe rightwing violence demanding a pushback of her open-door policy, she refused to recant her words or her policy.

Notwithstanding Angela Merkel’s heroic support of the beleaguered migrants, the West has been less than human in its treatment of migrants, and hence has no moral right to preach to Qatar on the subject. To quote the justifiably furious but tactless President of FIFA, Gianni Infantino, the White world’s manufactured outrage is nothing but “moral lesson giving, one-sided and just hypocrisy.”

Other issues that have at best, a tenuous, extraneous connection with sport have been weaponized to discountenance the organizers of the World Cup.  The English media, with its practiced gift of making mountains of molehills, have gone to town on the restrictions imposed by Qatar on the sale of alcohol in the stadiums. Perhaps, that was to be expected, especially when one considers the universal verity expressed by a soccer aficionado; “I’ve never seen a sober English football fan in my life.” Although I am one who, like Eliza Doolittle’s aunt, genuinely believes that “gin is mother’s milk”, I also know that the world would be a wreck if determined by the needs of the liquor-guzzling lot.

The West-inspired outrage at the liquor ban in stadiums during match time is another blatant example of humbug. In England, alcohol is okay in the concourse but not in your seat; France does not permit alcohol at stadiums in the nation’s top-flight league. The world should also know that in the two fabled soccer stadiums of the world -- Barcelona’s Camp Nou and Real Madrid’s Bernabeu – alcohol is strictly prohibited during games. But Qatar’s restriction is being viewed as another example of bigoted cultural provincialism.

For the first time, a ‘Code of conduct’ in the stadiums has been drawn up that forbids the spectators from being visibly under the influence of narcotics or alcohol or being in a state of undress or even shirtless and prohibits inflatable items and vuvuzelas. These are staid, square but unexceptionable rules of etiquette in a sporting arena.

There is also the needlessly hyped issue of Qatar’s intolerance of gay people. Homosexuality is illegal in Qatar, as it has been in most countries of the world, including India, till a few years ago. Its secular courts can impose a punishment of up to three years in prison for any breach, and if one is Muslim, the Sharia law of the death sentence applies, a penalty that has never actually been executed. The law was in place when Qatar was awarded the contract to host the World Cup, which makes the present brouhaha on the issue a despicable and totally unwarranted distraction and another slur aimed at stigmatizing Qatar.

Hitherto, the World Cup venues were adjudged almost exclusively on their physical readiness to host the tournament, but Qatar is being subjected to a visceral analysis of its world view, its laws, even a microscopic examination of how it got the infrastructure in place. It has been one long exercise in fault-finding with the nefarious motive of telling the world that the global South is incapable of handling a soccer World Cup.

That infamous Sepp Blatter, the former FIFA president, an unsavoury wheeler-dealer, who presided over FIFA’s many questionable deals, including the choice of Qatar to host the World Cup, had the audacity to state, only days before the start of the tournament that it was a mistake to award the World Cup to Qatar as it is “too small a country” and the “World Cup is too big for it". Qatar has emphatically proved him wrong with the most spectacular show that the soccer world has seen.

We are being told that no amount of spending on creating the most magnificent infrastructure and bounteous conveniences can make up for the absence of that ‘something”, the special sensation that constitutes the very essence of a World Cup. Perhaps the customary raucousness, the drunken bonhomie among spectators will be muted this time around, but then, ultimately, the World Cup is about football, and this tournament has already provided the very best that football can offer.

There have been upsets galore in the first few days of the tournament, with Saudi Arabia claiming the scalp of Argentina; Germany losing to Japan; and Iran beating Wales. And you know what? Qatar is being held partly guilty for these unexpected results because it has scheduled the tournament in winter -- the first time ever -- upending the European soccer calendar and giving players less time to train with their national teams. My word! These guys are the sorest losers on mother earth!

Even as I write, we are a week into this exquisite celebration of life. The World Cup is not just about kicking, heading, weaving patterns with the ball and scoring goals; it’s about radiating intoxicating sensations, about electric current running up the spine that makes you rejoice and grieve and laugh and curse, all in the space of 90 minutes, emotions that are revivified through 64 matches. It is, ultimately, about joie de vivre and togetherness, and forgetting, albeit briefly, the grimness of life!  Enjoy, and damn the critics!