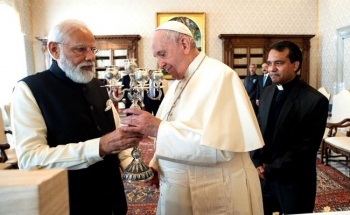 A Meet that Reminds Modi of Raj Dharm

This year’s G20 Summit held in Vatican City has attracted greater attention from the global family. Every summit, whether G20, World Economic Forum or G8, attracts world attention since these are forums in which world level policies and programs are formulated. For the Christian and Muslim minorities of India and conscious citizens of India, this summit was much more significant because there was the possibility of Prime Minister Narendra Modi meeting Pope Francis in Vatican. At a critical time when the lives, rights, and dignity of the minority Christian community are under constant threat, this meeting assumed greater significance.

Those who have followed the concerns of Pope Francis from the time he was elected Pope in 2013 are aware of two of his major concerns. Firstly, God is the creator, author and designer of all that is created. Hence, it is He and only He who is the Master of the Universe. It is He who is the Protector of the Universe. It is He who created human beings in His own image and likeness.

Secondly, all created human beings are children of God. Hence, all human beings are brothers and sisters. Since we are children of God and in extension, we are sisters and brothers to one another, it is demanded of us to live and love each other as sisters and brothers. Any pretension to be whole, full, complete, satisfied, capable, clever, and content in and with oneself will only lead to destruction. Human life essentially and existentially is to be completed and lived in communion. To be human is to be inter-human, to be human is to be interdependent and to be human is to be with and for other selves.

These concerns did not get limited with himself, in his writings and messages and in his invitation to the Catholics. But he put these concerns into practice, when signed a joint statement ‘The Document on Human Fraternity for World Peace and Living Together’ with the Grand Imam Ahmad Al-Tayyeb when they met in Abu Dhabi on 4th February 2019. The statement from this document, “God has created all human beings equal in rights, duties and dignity, and has called them to live together as brothers and sisters”, spells out the concerns, hopes and aspirations of the Pope for a more spiritual, humane, moral and conscious living and working towards a common destiny.

From this background if we try to analyse what possibly would have taken place between the two leaders during their meeting, one can understand that the lives, dignity and rights of over 130 crore citizens of this country would have been foremost. Especially, the lives, rights and dignity of the Christian and Muslim minorities, Tribals, Dalits, children, youth and women from the most marginalized and exploited communities. Above all, this meeting assumes a lot of significance since at this juncture religious, social, economic, political and constitutional freedom is battered. In addition to this, the violation of human rights of a vast segment of the population would have been foremost in the minds of both the leaders.

National and international human rights and minority rights institutions and government institutions have voiced concern about the growing violation of the rights of the minorities in India. The United States Commission on International Religious Freedom (USCIRF) in its annual report 2020 placed India alongside Pakistan, China and North Korea. In its key findings, the USCIRF report said that following the landslide victory of Prime Minister Narendra Modi's BJP in 2019, "the national government used its strengthened parliamentary majority to institute national level policies violating religious freedom across India, especially for Muslims". But the government of India said the report was "biased" and a "new level of misrepresentation". It is a fact that this is the first time India has been placed in this category since 2004.

It is significant to note that while the attacks on Christian churches, institutions and personnel are going on, there is no reaction from the government. While there are many pressing issues and problems of the citizens, they are hardly attended to by the government; instead, non-issues have taken the centre stage and the government is hoodwinking the people in the name of religious divide.

Further, individuals, institutions, cultural groups, religious outfits and politicians are appropriating extra-legal, extra-administrative, extra-judicial and extra-constitutional powers to violate the rights of the minorities. In the past, it was the lives, rights and dignities of the Tribals and Dalits that were at stake, but now the attacks on minorities are on the rise. Moreover, there seems to be no authority to question or challenge these individuals or institutions or collectives.

Prime Minister Narendra Modi said he had a “very warm meeting” with Pope Francis. This is a routine statement made whenever statesmen meet. But to interpret this to mean that the conversation between the Pope and the Prime Minster did not take up substantial issues of violation of rights of the minority Christians and human rights violation would be claiming too much. Pope Francis is known for his outstanding sense of human dignity and human rights.

Further, the photo session for which Narendra Modi is famous for can surely be used to boost up his image. This would be done since his image has taken a beating due to the unplanned and unconcerned lockdown imposed in March 2020, the horror the migrant labourers were subjected to, the total lack of healthcare provisions to attend to the pandemic patients due to which thousands died and even could not be properly cremated or buried. But conscious citizens around the globe are well aware of the limitations of these photo shots.

Some media sources are limiting the conversation between the Pope and Modi to environmental justice. But those who have followed the life and mission of Pope Francis know that he would have raised the violation of the rights of Christian and Muslim minorities and all the marginalised in India. He also would have kept in focus false accusation against Fr. Stan Swamy, his incarceration and institutional murder. Above all, he would have spoken or kept in focus equal rights and dignities of all citizens irrespective of caste, class, gender, ethnicity, religion, region and orientation. Hence, he would have expected the Prime Minister to engage in Raj Dharm.

In the Indian tradition, Raj Dharm refers to performing ones moral duty as a king, ruler, or dispenser of justice. Though every member of the society is to adhere to Dharm, that is, moral order and within that do one’s duty, it is enshrined upon the ruler to do his duty since he is anointed and appointed as a ruler or governor. Under this tradition, it is expected that the ruler engages in minimum government but maximum governance which is ensuring righteousness in his own attitude and behaviour, among his kith and kin, among his officers and among all the citizens of this kingdom. Especially it is his moral duty to protect the weak from the strong who break the law. If the verdict of a king is unjust it would be a great sin. A king should be very careful while executing the laws which are supposed to be based on Raj Dharm. If he is found to be abusing and violating the law, he is punishable.

The conscious and concerned Christians of India expected from this meeting that righteousness and justice would be practiced by the ruling elite and the minorities and the marginalized will not be victimized.