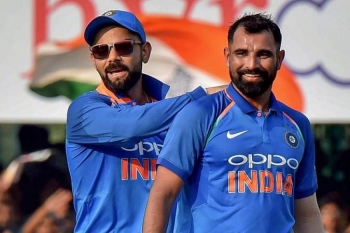 Bob’s Banter by Robert Clements Kohli and the Trolls..!

The trolls of today are like worms from the woodwork! They roam the face of websites, WhatsApp groups and have a huge, negative online presence!
In the good ole days, when one read or heard fairytales on one’s mother’s lap, the troll was a dwarf in Scandinavian folklore who dwelt in the hills, small, tiny fellows, who were afraid of the outside world, hid themselves from the public eye, but were mean, nasty and vicious, in the way they carried out little cowardly attacks on people at large, not directly, but behind their backs.
Today’s trolls, aren’t any different.
They are like worms in the woodwork, who come out at night and scratch, irritate, and cause small annoyances. They are basically cowards, who have the same agenda of terrorists; hit and run. Kohli, must have done a lot of hitting and running quickly between the wickets while playing cricket and gathering cheeky singles! But here were fellows attacking Mohammed Shami who hit the bowler with their bouncer words, then ran off the field. As a captain who was used to facing a ball with a broad bat if the situation required such, he did just that, and in no uncertain terms stood up for his teammate!
"We're playing on the field, we're not a bunch of spineless people on social media. This has become a source of entertainment for some people which is very sad. All this drama created on the outside is based on people's frustrations," Kohli added. "We stand by him 200 per cent. Our brotherhood in the team cannot be shaken."
That is the way to deal with trolls. Show the world that just because a lie is repeated often enough by these worms and dwarfs, it doesn’t become the truth!
Expose not just the lies but even as these social media hecklers portray themselves as giants, walking the face of the earth, flexing muscles and pretending to have biceps and six pack chests, with their four letter words, and mockery, expose them as shadow giants, holding a focus light to their dwarf figures, so the screen will show them off as huge monsters.
Their fighting is similar to a terrorist: As much as the terrorist targets women and children, trolls, target innocents, and others who come online unprepared to share their views. These are the fairytale dwarfs and midgets of yesteryears who have got a voice of anonymity through the internet!
How do you and I deal with them?
If you are trolled, the best and most effective way is to ignore them, though same trolls also have, follower trolls, who encourage him be sending smileys or little thumbs up signs whenever they say or write something. Just ignore the lot!
But if someone you know is being trolled, stand up like Captain Kohli and show them for what they are; just worms from the woodwork..!