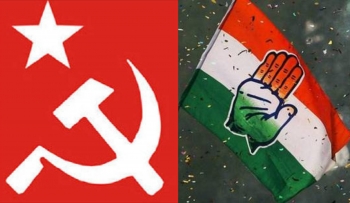 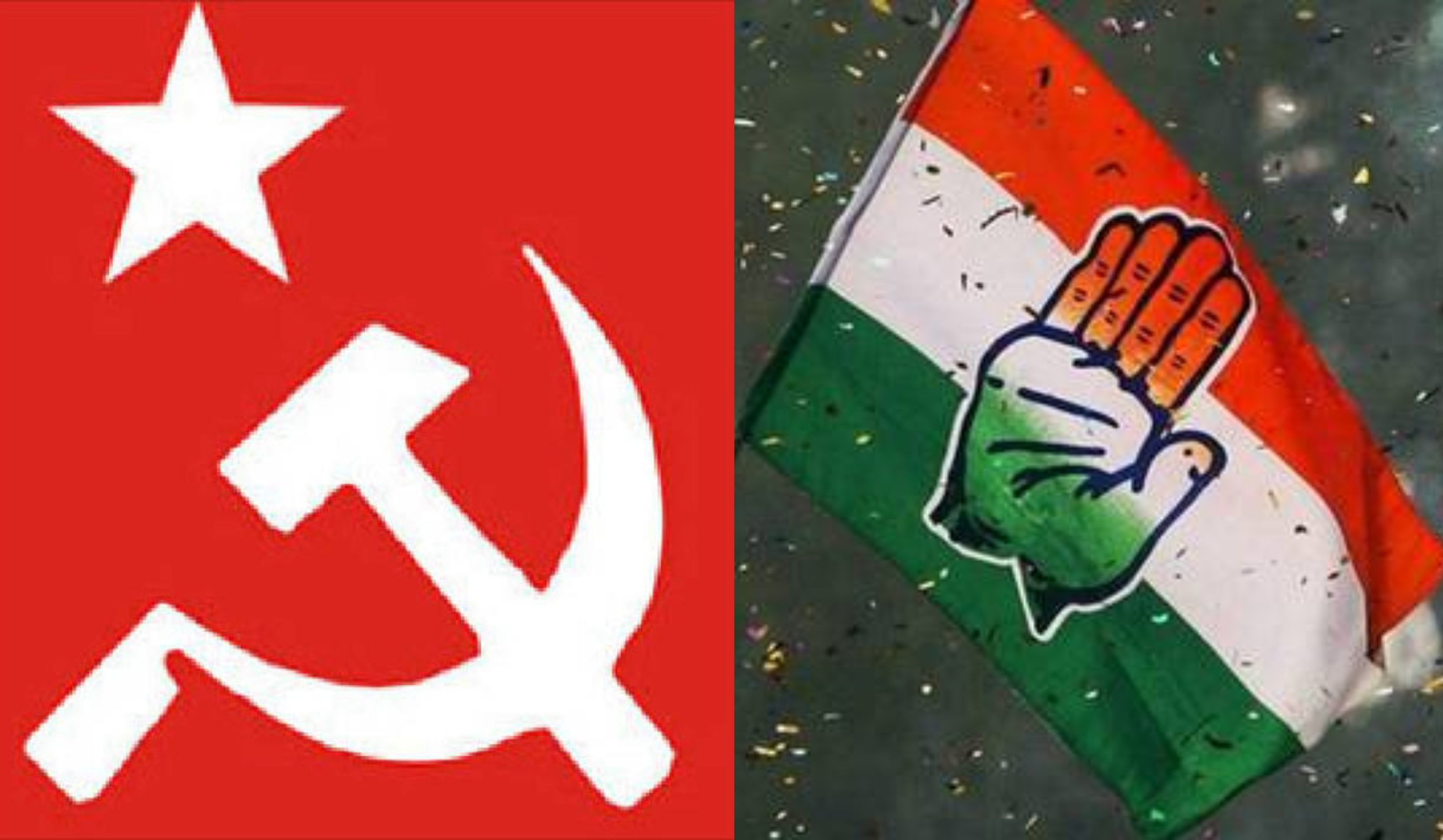 With almost no legislative presence, the saffron party, BJP, has emerged as the main opposition to Mamata Banerjee and the Trinamool Congress for the 2021 Assembly elections in West Bengal. The first challenge for the Left-Congress now is to maintain their position as principal opposition in the West Bengal Assembly. In the 2016 Assembly election, which the Trinamool won with a thumping majority, the BJP secured only two seats. The dilemma before the Left-Congress, electorally, is whether to see the TMC or BJP as its main target.

In the 2019 Lok Sabha elections, the Left Front, led by the Communist Party of India-Marxists (CPI-M), did not manage to win a single Parliamentary seat. Its alliance partner, the Congress, didn’t fare much better, registering victory in just two seats. TMC is the foster child of Congress party. The West Bengal Assembly comprises of 295 Members of the Legislative Assembly, or MLAs. The state contributes 42 seats to the Lok Sabha and 16 seats to the Rajya Sabha of the Indian Parliament.

In the 2019 elections, the Left votes, largely en masse, shifted to the BJP. The BJP got almost 1.5 crore more votes than it did in the 2014 Lok Sabha elections. In 2011, and especially after 2016, TMC violence against Left cadres increased.

It all depends as to what extent TMC is able to popularize its good governance over the polarization tactics of BJP. The TMC will raise farmers’ rights, demonetization, labours plight during corona times and unemployment issues as their key electoral planks. The BJP will try to polarize the votes in their favour and project Central Government machinery on their side.

“Of course the BJP is our main opposition, not just in West Bengal but also nationally. They are ideologically and politically completely opposed to us. But that being said, we are not ready to give an inch to Mamata Banerjee either. The TMC needs to go, but they can’t be replaced by the BJP. That is our position”, said Shatarup Ghosh, CPI-M leader.

Amidst all the turmoil, the Bihar elections have given the alliance a hope to project developmental issues like employment, safety and a prosperous life for the voters. Couple of months before the elections, everyone was saying that the BJP will sweep the elections on the basis of Ram Mandir and the religion card. But in the lead up to the elections, Tejashwi Yadav and the Mahagathbandhan brought the focus back on governance. They didn’t win, but the fact that it was a close contest means that people still care about issues that affect them directly.

As a learning from the Bihar elections, where the Left performed better than the Congress, will it now push to be senior alliance partner in the Bengal elections? Asaduddin Owaisi of All India Majlis-e-Ittehadul Muslimeen (AIMIM) has already announced to campaign in the West Bengal elections. Will that again accelerate the polarization of the voters? While the Bihar elections were still on, Union Home Minister Amit Shah announced to win over 200 seats in WB. That shows how determined BJP is to win the upcoming polls.

Another problem for the alliance is that, like the BJP, they may not have a Chief Ministerial face to project in the elections. Unlike the BJP, both the Left and the Congress have senior, seasoned politicians in their ranks. But who among them can be made the face of the alliance to put up a good fight against Mamata?

Adhir Ranjan Chowdhury of Congress is well accepted within the party and gains respect from TMC and Left equally. He has sway amongst the youth, is a grassroots politician and also has a national and charismatic face. That’s something that Left leaders like Surjya Kanta Mishra and Biman Bose lack. They will most probably not project a CM face, but if they do, and if they present Adhir, it will definitely ramp up their campaign. CPI-M General Secretary Sitaram Yechury, political leader of a National stature could be a consensus candidate.

A Mamata confident, Transport Minister Suvendu Adhikari recently resigned from the post and is likely to join BJP. This is learnt to have resulted in the attack on the cavalcade of BJP president J P Nadda and Party General Secretary Kailash Vijayvargiya, allegedly by TMC cadres. The incident has been flared up out of proportion at both ends. Mamata Banerjee has called the incident a “drama” and blamed the BJP for the violence. Governor Jagdeep Dhankhar has accused the bureaucracy of ignoring his warning about a potential threat to law and order and warned the chief minister “not to play with fire”. The Union Home Ministry has asked for a report from the state administration. The situation is so grim that Vijayvargiya has been provided with a Z category security.

In the past, Left took over from Bangla Congress using their soft corner towards Naxalites and Maoists, later TMC overthrew Leftists with their muscle power and now the BJP is using the same tactics to come to power in West Bengal. In fact, an unusual number of TMC candidates were elected unopposed in the 2018 Panchayat polls because opposition nominees allegedly withdrew from the contest fearing violence. The political clashes have claimed lives of over two dozen people this year.

One of the biggest challenges for the West Bengal BJP ahead of the 2021 state elections is to put up a credible, believable Chief Ministerial face opposite Trinamool Congress supremo Mamata Banerjee. Some of the front runners include Dilip Ghosh (State BJP president and a Lok Sabha Member), Babul Supriyo (Union Minister for Environment, Forest and Climate Change), Mukul Roy (Ex TMC leader), Tathaghata Roy (Former Governor of Meghalaya) and Suvendu Adhikari (who rebelled against Mamata recently).

Dilip Ghosh, is presently seen as the top contender to be the party's face in the electoral race. He is learnt to have pulled the strings for BJP’s victory in 2019 LS polls. A staunch RSS man has also spewed enough commentary on cow urine, beef, and women of Jadavpur University to prove his Hindutva-hardliner credentials. His controversial statement, “Our governments in Uttar Pradesh, Assam and Karnataka shot CAA protestors like dogs,” had become a bone of contention within BJP.

Union Minister of State Babul Supriyo, a celebrity and a great singer, is the visible face of BJP to draw crowds. Mukul Roy, once Mamata's man, joined the BJP in 2017. His organisational skills helped the BJP make massive inroads in Bengal in the 2018 panchayat elections, as well as the 2019 Lok Sabha elections. Former Meghalaya Governor Tathagata Roy just ended his term and has expressed his desire to return to active politics. Roy was president of West Bengal BJP from 2002 to 2006. "We don't worship the cow in the sense that is done in north India...different parts have different cultures so we have to talk in terms of our Bengali culture...And rationality is a part of the Bengali culture, we want to appeal to people's reason, we don't want to appeal to their love for the cow", said Roy in a recent interview to India Today.

The people of Bengal are known for their passionate love towards music and sports, and in particular football and cricket. BJP is learnt to be in touch with Sourav Ganguly too. Since his appointment as BCCI President, the Kolkata political circles are rife with discussions of the BJP possibly pulling him in to campaign for Bengal 2021.

Cutting across the party lines, Mamata Banerjee stands out among her rivals. Considering this fact, none of the parties like BJP, Congress or CPI-M would like to project a weak candidate as its CM face. This may be especially true, as a less charismatic figure, pitted against Mamata, may rattle the party's existing strongholds in the state. But as they say in politics, as long as there's power up for grabs, there will be politicians scrambling for it. Only a ‘Macho man’ can be portrayed against Mamata. The search is on for a ‘Dada’, who can directly take on ‘Didi’ head on.