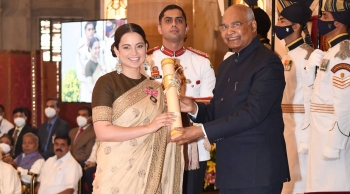 The country is on the horns of a dilemma!

A new generation of know-alls is hell-bent on raking up controversies with their vitriolic outbursts against -- no, not the system mind you; but against personalities and events which have always been thought of and accepted as historic and momentous.

Somehow it is the penchant for zeroing in on the events of the pre-independence and the immediate period following it which has kept the controversy-makers engrossed.

Inflammatory statements by celebrities about incidents of the by-gone and the more testing era of Indian history -- which have become a bit too frequent for comfort -- demand an immediate censure and calls for stringent action to be initiated against the celebrated stars.

And it is all the more shocking to note that those raking up the controversies are neither the ‘midnight children’ -- a passing reference to those born in 1947 or immediately thereafter -- nor are they even remotely connected with the instances or individuals which have become the contentious issues.

Unfortunately, social media too, of late, has become a convenient platform for the contemporary generation to cast aspersions on the integrity of some of the icons of Indian history who have made a name for themselves as the architects of modern India.

Getting the country liberated from the shackles of colonial bondage was never an easy task and those who valiantly fought and gained us our freedom deserve the eternal admiration and gratitude of the countrymen.

Ascribing their own meaning to the freedom crusade, every individual and various other groups involved in the freedom struggle drew up their own blueprints to give the motherland a dignified existence, free from the slavery and oppression of the British Empire.

While some favoured armed uprisings to the more non-violent methods others preached, they all will be equally remembered for their single-minded devotion to the task at hand.

Not to say that there was unanimity amongst the leaders about the approach chosen even then. But for many, the end justified the means. Yet, countless were the sacrifices made along the way!

Hence each and every one of them deserves the glorious mention in the nation’s history for posterity to be proud of them.

But lately many youngsters seem to have developed a fondness for hauling highly revered leaders of the pre-independence era.

While everyone has a right to form their own views and opinions about anything and everything under the sky, are we in a position today to deliberate on what prompted the great men to a particular course of action in the face of the adversities then.

No doubt we have largely depended on text books authored by the English for assimilating the facts on these matters. Despite repeated appeals, why were attempts not made to change our syllabi and school texts to educate later generations from the Indian perspective!

Basically it is all about teaching youngsters Indian history as it was chronicled by Indian historians. For ages now, we are being fed an overdose of English narratives authored by British and other European historians.

But it has always remained a wonder that even after decades of independence, successive governments have shunned any attempts to ameliorate the standards of education by moving away from the style instituted by the British and adopted a ‘desi’ version where the thrust would have been more on educating youngsters from the Indian perspective.

The Anglicization of Indians has been so thorough and complete that even after seven-odd decades the British in us has yet to set us free. But how right would it be to deny our children the knowledge that would make them ‘pucca’ Indians!

Beginning from the glorification of the Moghul dynasty to the advent of the East India Company and the subsequent suppression of native Indians, we are always taught that foreigners always invaded India and ruled it. Are we to believe that our nation has always lived in subjugation!

There is hence an urgent need to ‘Indianize’ not only our education system but also our mindset and the very way we think!

Great men and women, some known and an equal number of unknowns; some who died in glory while others embraced anonymity to their graves; it has been a long list of patriotic Indians who fought valiantly and gained freedom for the motherland, quite often at the cost of their lives.

Besides this, there were leaders who were directing the freedom movement through daring acts of defiance and deliberations with the British rulers. With both sides either gaining or conceding advantages during the parleys, some politics would have inadvertently have characterized the proceedings.

If it is however the ‘conceding’ element that is bringing them ‘disrepute’ from the modern generation, let us not forget that no matter how great the leaders, they too were humans and not above erring in their decisions.

Both the above mentioned ‘classes’ strived for the same cause and gained the country freedom from the yokes of slavery. Shouldn’t that be enough to place them on the high-pedestal of eminence and revered through the ages!

But no, many have mastered the art of unnecessarily delving into the past and summarily dismissing the documented proof of the heroics of those whom they have decided to discredit and condemn into the depths of ignominy without understanding the facts.

It’s time we decided to look straight ahead, at a future that could be as rosy as it was bleak during the colonial era. Contributing to the nation-building plans envisaged, it can be ensured that India takes up an effective role within the world community.

Instead of living in the past, the younger generation should be streamlining all its energy towards steering India onto the path of self-reliance -- an Aatmanirbhar Bharat!