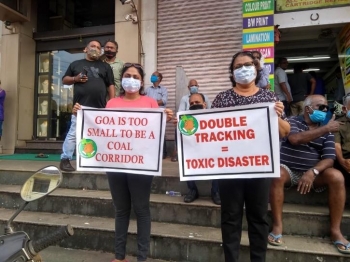 THE COAL STRIFE: Battle against ‘coal’ 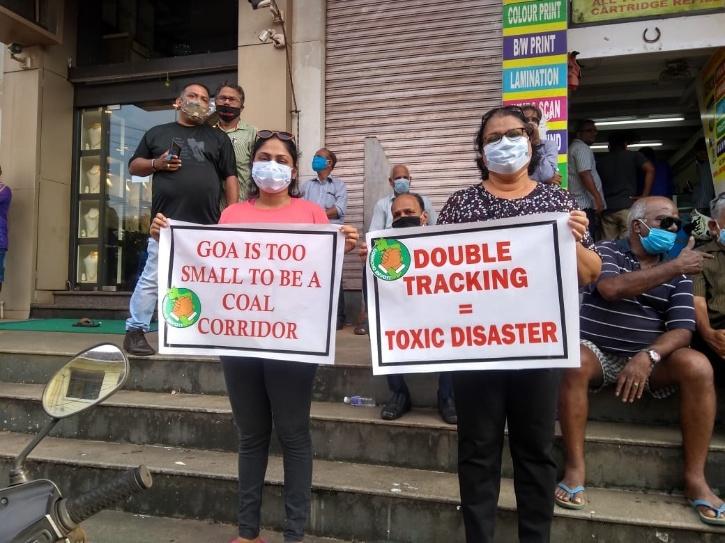 Are plans afoot to convert Goa into a coal-hub!

Recently the CM opined that developmental works related to the National Highway are necessary. There is of course no denying this fact!

But when the developments are purportedly to facilitate programs that are detrimental to the cause of the state, there is every reason to be alarmed.

For, it is being alleged that Goa is gradually easing it into its new identity. Dubbed as a coal hub by activists, the government is apparently in no mood to dispel notions of the state being one. At least its half-hearted attempts fail to convince one otherwise!

A series of investigative reporting by the Indian Express way back in 2017 gave indications of a systematic built up to the current horror which has a huge section of the populace raising the banner of revolt against an inconsiderate government hell-bent on imposing its will on the people.

The construction of the Verna-Borim four-lane highway, presumably to cut down on the time taken by large cargo trucks and container trucks transporting materials and finished goods from, and to, Verna Industrial estate hardly raised any eyebrows initially.
In fact, the visage of the long asphalted surface was on the contrary acclaimed as a marvel of the latest techniques in road construction.

The four-lane link road along with paved shoulders being built on NH17B to connect Verna Industrial Estate with Borim, and passing through Loutolim, is now dubbed as the new ‘coal corridor’ being designed to facilitate the transportation of coal through the state.

The ‘coal strife’ is nothing to new to Goa though.

The Goan newspaper carried an article, Death By Coal, by Neshwin Almeida, on October 20, 2012.

“Way back in 1975, the Dempo Group of Companies set up a coke and carbon plant to process graphite rods in the sleepy village of  Sao Jose de Areal near Nessai Industrial estate. The village was excited with the prospect of jobs, of prosperity and of development.

The entire process involved burning coke at high temperatures and extracting hydrocarbons in the form of oil out of the burnt coke.”

Now comes the most interesting part!

“Carbon particles which flew out of the chimneys of the Goa Carbon Limited, had, according to health experts, poisonous carcinogens that caused breathing problems and even lung cancer in the village.”

Social Justice Forum Sao Jose de Areal held a rally at Panaji in December of 2017 to protest against the coal pollution that the villagers are suffering from due to the hazardous emissions from the Goa Carbon Limited at Nessai.

This was after a two-hour long demonstration was held by activists four months earlier highlighting the plight of the villagers who were ‘compelled to habituate’ themselves to live with coal dust pollution because of the noxious contaminants from the factory in Nessai.

Not having elicited any favourable response from the government but for a few cosmetic ‘adjustments’, the protests over the years gradually petered out and have had nothing much to show for the years of struggle.

Very recently, as we all know, Nessai, has been at the epicentre of another anti-coal movement in the state. This once it has come by way of the massive protests building up all over the state over the rail double tracking to enable transportation of coal.

The blight of coal does not seem to leave Nessai alone, or so it appears!

It is however the transportation of coal through the cities and hinterlands of the state which has galvanized a movement which is giving the government the jitters today.

The statement by the Chief Minister that the double tracking of South Western Railway line is not being carried out to promote coal transportation in the state hence appears to have a hollow ring about it.

The vehemence with which the local NGO groups, along with other politically connected organizations, have gone about drumming up support against railway double tracking in Salcete ensures that since the Konkan Railway realignment movement, this would be an agitation which will rock the entire state.

If the Konkan Railway realignment movement was all about protests against the proposed rail line through Goa which, besides having a huge environmental impact, would flood coastal regions and destroy its unique coastal estuarine agro-eco system; the anti-double tracking agitation, after about three decades, is against the ‘agenda’ of the state government which proposes to turn Goa into a coal-hub and use the rails for coal and not the people.

It is definitely encouraging to have the locals responding in thousands to the call made by organizations opposing track doubling and coal transportation projects in the state.

People should have a say in the affairs of the state. It is said that a strong democracy is built on questioning state policy. Maybe it is this belief that gives masses the courage to align with groups opposed to any project that has ‘anti-people’ stamped all over it.
When the government bulldozes ahead with plans that are disadvantageous to the state, the people have every right to take the issue out to the streets.

But it is the presence of quite a few disgruntled leaders in their midst that the protestors should be wary about. Most of them showing solidarity with the cause are out of power and in political wilderness themselves, and are doing so only to worm their way out of the miserable position they find themselves in.

Leaving one in no doubt as to what their response to this quandary would have been were they to be associates in the ruling dispensation, let us sincerely hope that this people’s movement reaches a logical conclusion and is not ‘hijacked’ midway by any politician or political party to promote its interests.

To cut a long story short, roads and rails in the state have apparently moved over from being travelling means for the public to safe conduits as cargo passages for transportation of coal.