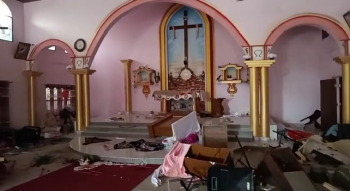 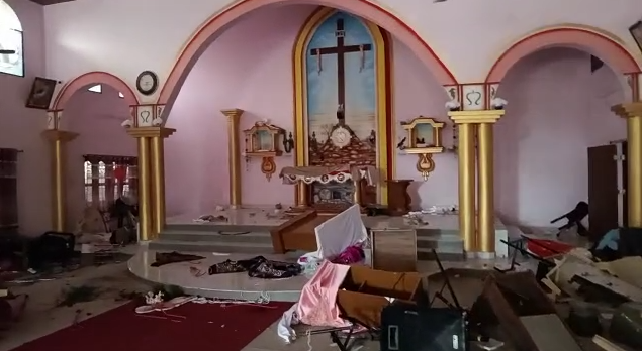 As clashes between the tribal Christians and non-Christian indigenous people escalated in Narayanpur district in Chhattisgarh, a mob vandalized a Catholic Church, and a grotto of Mother Mary on Monday.

According to reports, the violent mob barged into the compound of Sacred Heart Church at around 2 pm.

The mob initially started throwing stones at the Church. Suddenly, they became more aggressive and broke open the church doors; once inside, they destroyed everything that came their way, including the statue of Jesus Christ.

Some of them, who were armed with sticks and rods, entered the presbytery and vandalized it as well. The mob also destroyed the grotto of Mother Mary installed on the Church campus.

However, they were chased away by the police personnel who were present there.

Narrating the incident to Indian Currents, Fr. Devasia said the attack took place when he was at the Viswadeepti High School, which is on the same campus, and hence he escaped any physical assault. The school was functioning when the hooligans attacked the church.

Fr. Devasia further said that as the attackers were vandalizing the church, the students were sent out through another gate. The sisters and teachers were also saved by the intervention of the police.

“The more than five-decade-old Church was rebuilt five years back and now everything inside is destroyed,” the parish priest lamented.

He further said that the police were informed in the morning about the gathering of thousands of people near a market, about one km away. The police had assured the church authorities that nothing untoward would happen.

According to reports, Sandandand Kumar, Superintendent of Police of the district, was injured on his head as he tried to negotiate with the angry crowd that was attacking the Church.

The injured officer was seen clutching his head as blood trickled down his face. He has been admitted to a hospital.

The latest attack on the Catholic Church is the fallout of the ongoing enmity between the indigenous people following Christianity and those opposing them.

Those opposed to Christianity want their fellow brethren to give up their Christian faith and continue in their traditional animist practices, but those following Christianity refused to comply with them leading to clashes.

More than 1000 Christians had to flee from their  homes in Narayanpur and Kondegaon districts in the state in the past couple of months.

Archbishop Victor Hendry Thakur condemned the attack and demanded action against those behind it. “The attacks have nothing to do with religious conversion as has been made out. It is a clear case of law and order problem. The state police did not initiate action against groups that unleashed violence against Christians,” Archbishop Thakur told.

Indian Currents in its latest issue has highlighted the escalating violence and attacks on Christians in Chhattisgarh. It has also highlighted a report by a fact-finding team that visited the trouble spots.