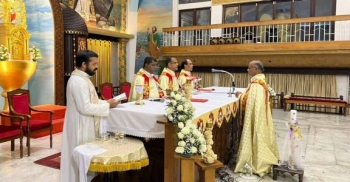 Forum of Religious Pleads for Freedom in Liturgical Practices

“Freedom in Liturgical Practices may be given, provided they do not cause any harm to the Gospel values and Pastoral concerns,” said the Forum of Religious for Justice and Peace in an appeal to the Syro-Malabar Hierarchy in view of the ongoing liturgical crisis in the church.

In a letter signed by Sr. Dorothy Fernandes PBVM, National Convenor, and Fr. Antony F Thekkiniyath OFM CAP, National Secretary, the Forum has urged the Hierarchy to have discernment and dialogue towards a Christian solution for the present crisis. The Forum is a platform of thousands of Religious women and men in the country.

Seeking an immediate solution to the issue, the Forum said the controversy within the Syro-Malabar Church regarding the mode of saying Mass has become an issue that damages the image of the Catholic Church in India.

Quoting Pope Francis, the letter said: “Polarization is not Catholic. A Catholic cannot think either-or (aut-aut) and reduce everything to polarization. The essence of what is Catholic is both-and (et-et). The Catholic unites the good and the not-so-good. There is only one people of God. When there is polarization, a divisive mentality arises, which privileges some and leaves others behind. The Catholic always harmonizes differences. If we see how the Holy Spirit acts; it first causes disorder: Think of the morning of Pentecost, and the confusion and mess (lío) it created there, and then it brings about harmony The Holy Spirit in the Church does not reduce everything to just one value; rather, it harmonizes opposing differences. That is the Catholic spirit. The more harmony there is between the differences and the opposites, the more Catholic it is. The more polarization there is, the more one loses the Catholic spirit and falls into a sectarian spirit. This [saying] is not mine, but I repeat it: what is Catholic is not either-or, but is both-and, combining differences.”

Drawing the attention of the Hierarchy to the present context in the country, the letter said: “We have many urgent issues such as restrictions on religious freedom and rampant violation of human rights, caste discrimination, gender injustice, political polarization, increasing hatred and violence on religious minorities, neglect of millions of poor and marginalized, etc. The present liturgical issue which concerns a particular group in the Church is distracting us from vital and urgent issues and sapping and deviating all our energies. Our Christian instinct must make us rise above the feuds over customs, practices, rules and regulations in the Church and open our minds and hearts to wider human realities and concerns, making ourselves involved in the salvific process of our Lord Jesus Christ.”

The Forum said that the Church was primarily people of God. Their views and concerns must be her priority. The opinions and insights of the Laity must be taken seriously in settling the present issue. The Laity must be made to feel an essential part of the body of Christ.

The Forum suggested three immediate steps to prevent further deterioration of the situation in the Church.

* A commission consisting of Clergy, Religious, Lay Men and Women may be appointed to find a solution agreeable to all.

* Freedom in Liturgical Practices may be given, provided they do not cause any harm to the Gospel values and Pastoral concerns.

* Bishop Antony Kariyil and others, who were adversely affected by this crisis, must be given honourable reparation.