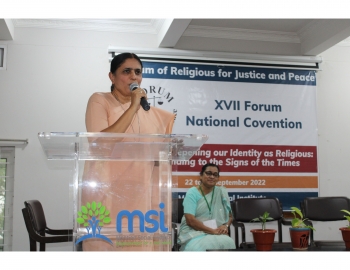 The ‘Forum of Religious for Justice and Peace’ held its XVII National Convention at the Montfort Social Institute, Hyderabad, Telangana from 22 to 24 September 2022. The theme of the Convention was “Deepening our Identity as Religious: Responding to the Signs of the Times”. More than sixty women and men Religious, from sixteen States and representing twenty Religious Congregations participated in the Convention.

At the Inaugural Programme, Sr. M. Nirmalini A.C., the National President of the Conference of Religious India (CRI) and also the Superior General of the Apostolic Carmel Congregation gave the keynote address on the theme of the Convention. Setting the tone for the Convention Sr Nirmalini’s address was insightful and challenging, calling upon the participants to respond to the signs of the times through a deepening of one’s spirituality beginning with self-transformation. She said, “we need to go on an inner journey to re-discover interiority and capacity to appreciate what is important and to live it with passion, enthusiasm and energy. Each of us will have to go through a personal transformation and this is not magic but a slow intentional process. We will be asked to shift, adapt, change and live into the future that will not look the same as we see it now. This process is a gift from God and we have to be open by deepening our prayer, listening and discerning and practicing radical availability to the signs of the times”

Bishop Raphael Thattil of the Shamshabad Diocese also addressed the gathering and exhorted them to continue playing a prophetic role in the Church. Referring to Pope Francis’ homily on the Good Samaritan, he said that many in the Church today put the emphasis on the ‘cultic’ and conveniently forget about being ‘prophetic’. He appreciated the significant role that the participants play for the cause of justice in the Church and in the Country today.

Earlier, Buddhist monk Tashi Chodup, led the assembly in a meditation. The National Convener of the Forum, Sr Dorothy Fernandes welcomed the dignitaries (which also included a few local Provincials) and the participants. Br Varghese Theckanath SG, the host as Director of the MSI and a veteran of the Forum traced the history of the Forum since its inception and also explained the dynamics of the Convention. The other highlights of the Inaugural Session, included the release of a booklet ‘The Kuravilangad Case: A Critical Study’ which has been published by the Forum; and a very meaningful interaction by the participants with Sr Nirmalini.

Another resource person at the Convention was Meera Sanghamitra, a well-known activist who is actively involved with feminist, civil liberties, transgender rights issues as well as in the National Alliance of Peoples Movements (NAPM. She provided the participants with an incisive picture of the many issues which grip the poor and marginalised today.

A meaningful and contextual Statement (attached) unanimously passed by the participants before the conclusion of the Convention calls for radical discipleship!

(*This note is by Cedric Prakash SJ {cedricprakash@gmail.com} on behalf of the Forum Core Team)