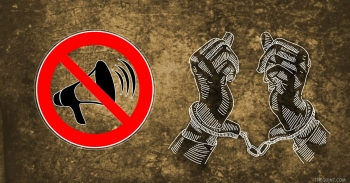 As per NDTV news report on 16th March, a Congress Lok Sabha member from Telangana Anumula Revanth Reddy sought from the government the number of cases registered under the law of sedition across the country during the last ten years, the conviction rate and steps taken for their speedy trial. This question was asked against the backdrop of an increasing number of cases filed under sedition against the critics of the BJP governments since 2014.

Instead of presenting the data for ten years, the minister concerned presented the data for six years starting from 2014 to 2019.  There has been a progressive increase in the number of sedition cases filed against people. The number increased from 35 in 2016 to 93 in 2019, a 165% jump. In 2019 the conviction rate for sedition was 3.3 percent. It clearly indicates that most of the cases are politically motivated in order to harass and silence the critics of the government.

A new database launched on February 2, 2021 under the name, “article14” has documented and analysed the sedition cases between January 1, 2010 and December 31, 2020. The data analysis has revealed some startling facts as given below.

•    65% of nearly 11,000 individuals in 816 sedition cases since 2010 were implicated after 2014 when Modi took office. Among those charged with sedition: opposition politicians, students, journalists, authors and academics.

•    96% of sedition cases filed against 405 Indians for criticising politicians and governments over the last decade were registered after 2014, with 149 accused of making “critical” and/or “derogatory” remarks against Modi, 144 against Uttar Pradesh (UP) chief minister Yogi Adityanath.

•    An increase of 28% in the number of sedition cases filed each year between 2014 and 2020, Modi’s time in office, compared to the yearly average between 2010 and 2014, the second term of the United Progressive Alliance (UPA) administration.

•    Much of this increase is due to a surge in sedition cases after protest movements, such as those against the Citizenship Amendment Act (CAA) 2019 and the rape of a Dalit teen at Hathras in UP.

•    Of the five states with the highest number of sedition cases, a majority were registered during the BJP’s time in power in four of them—Bihar, UP, Karnataka and Jharkhand.

•    In UP, 77% of 115 sedition cases since 2010 were registered over the last four years, since Yogi Adityanath became the chief minister. More than half of these were around issues of “nationalism”: against those who protested the CAA, for shouting “Hindustan Murdabad”, allegedly celebrating Pulwama attack and India’s loss in 2017 ICC Champions Trophy.

•    In Bihar, between 2010-2014, the majority of sedition cases related to Maoism and counterfeit currency. After 2014, 23% of sedition cases were against those who protested the CAA, against celebrities who spoke up against lynching and intolerance and those who allegedly raised “pro-Pakistan” slogans.

While answering the question raised by Anumula Revanth Reddy in the Lok Sabha regarding sedition cases, Union minister G Kishan Reddy said, "There is no direct involvement of the Centre in sedition cases." The analysis of the data clearly shows that there has been a phenomenal increase in sedition cases over the last six years since the BJP came to power at the Centre and large majority of these cases were filed in the BJP ruled states. The database found that sedition charges were a de-facto strategy for many of these governments, each time they encountered public criticism and protests. Hence the Union government cannot shy away from the charge of increase in the number of frivolous sedition cases filed against the critics of the BJP government.

The sedition law, Section 124A of the Indian Penal Code (IPC), is a colonial legacy, used by the British government to prosecute freedom fighters. The sedition law was applied by the British administration to prosecute Bal Gangadhar Tilak in 1897. Mahatma Gandhi also was later tried for sedition for his articles in Young India. Section 124A of IPC defines sedition as any signs, visible representations, or words, spoken or written, that can cause “hatred or contempt, or excitement or attempt to excite disaffection” towards the government.

In 1962, although the Supreme Court upheld the constitutionality of sedition in Kedar Nath vs State of Bihar, it strictly limited its application to acts involving intention or tendency to create disorder, or disturbance of law and order, or incitement of violence. Often police are not aware of this requirement or wilfully ignore it. It is an anomaly that the United Kingdom abolished sedition law in 2009, while the Indian government continues to use it against its own citizens.

Two recent court judgements, one by the Supreme Court and another by a Delhi Sessions Court, have brought to light the misuse of sedition law. The apex court dismissed public interest litigation (PIL) against former chief minister of J&K Farooq Abdullah, which had charged him with indulging in a “seditious act”. The SC said that ex

The second judgement is granting bail to the 23 year old climate activist Dish Ravi who was arrested by the Delhi Police, accusing her of sedition for editing and sharing a tool kit originally designed by the well known Swedish climate activist Greta Thunberg. While granting bail to Disha Ravi, a Delhi Sessions Court said that “the offence of sedition cannot be invoked to minister to the wounded vanity of the government.” The Court also added further that the government couldn’t put people, “behind bars simply because they choose to disagree with the state policy.

In an interview to Karan Thappar for The Wire, Justice Deepak Gupta, who retired from the Supreme Court in May 2020, said that Section 124 A of the IPC should be “immediately abolished” because it is used by the governments to create fear in the citizens to prevent or throttle dissent. He said that the law is widely misused and the instances of its misuse are increasing. He also suggested that the Supreme Court should lay down detailed guidelines how the police should apply the law till it is abolished.

It is also pertinent to quote what Julio Ribeiro former Director General of Police of Punjab wrote in an article published in Scroll.in under the title, “By arresting Disha Ravi for sedition, the government is tilting at windmills, about the urgent need for junking this law. “The tendency of the police, egged on by the ruling political dispensation, to fall back upon the sedition clause needs to be nipped in the bud before many more law-abiding citizens, operating in the sphere of journalism or civil activism, are roped in by a government bent on snuffing out all criticism and opposition.”

The phenomenal increase in the number of sedition cases filed by the BJP governments, the judgements delivered by different courts at different times, and the views expressed by legal experts vindicate the need for doing away with the law of sedition. “The law of sedition is too colonial, too dangerous and too destructive of the basic freedoms of the people. It should be scrapped”, wrote P D T Achary wrote four years ago in article, “Sedition laws have no place in a democracy and should be repealed”.

The BJP government wants the continuation of this law in the statute book in order to silence its critics and enhance its power. The Congress party had promised to scrap the sedition law prior to the Lok Sabha election in 2019. But prime minister Narendra Modi mocked at the Congress and said at an election rally in Guwahati, “Congress wants to encourage those who burn the tricolour, those who do not chant Jai Hind like you and me and rather utter the divisive lines like Bharat tere tukde tukde (India, may you become pieces).

In a democracy people are the masters. In spite of the harassment and threats from the government, the citizens have to raise their voice against the abuse of this law and the urgent need for doing away with it. Young people like Safoora Zargar, Devangana Kalita, Nodeep Kaur and Disha Ravi give hope that the people of India are not going to bear the draconian laws that are being used by the government against the dissenting citizens.