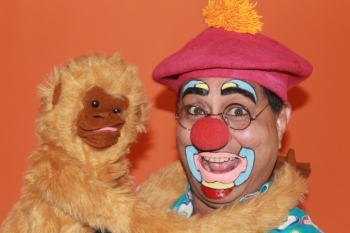 That morning Pravin Tulpule was pleasantly surprised to see his photo along with a little boy’s photo in the newspaper. But as he read the news, he was saddened.

His friend had invited him to perform his magic show to cancer affected children in a Mumbai hospital. During the programme, that little boy was tagging along with him until the end of the show. The news read that boy was no more. The last wish of the boy was to see a clown performing magic. Pravin had fulfilled his desire unaware.

When Pravin was reflecting on that, he realised that his mission in life should be to make the terminally-ill children happy. Though he cannot cure cancer, happiness will provide them emotional succor. It will help them to forget their pain for some time. Also it will cheer their parents, who have been seeing their kids battling with pain and death.

That happened in 2000. Since then Pravin has made his mission to bring cheer to the terminally ill children in the hospitals. He also gives free magic programmes in schools, to vulnerable children living in shelter homes, orphanages, pediatric wards of hospitals, old-age homes and events organized by NGOs. Commercial assignments keep his kitchen fire burning. His well-versed daughters Shruti and Malhar also often accompany him to lend their support. He has also kicked off a crowd funding campaign of Rs 10 lakh to fund treatment of cancer children.

Seeing a magic show at the age of 14, Pravin was attracted towards it. He started to practice it with a set of cards gifted to him. He began to improve the trade by reading books sold in pavements. First time he performed his tricks to his family members. As more people came to see his magic, he charged 25 paisa each person.

Though Pravin desired to make magic his profession, his brother-in-law motivated him to serve the nation joining the Indian Navy. After his graduation from Parashurambhua College in Pune, he joined the Navy. He became a lieutenant commander officer. He even won a President’s Gold Medal.

But the childhood impulse to perform tricks and make others laugh was very much in Pravin. Though only three years more were there to avail his naval pension, he resigned his job in 2000 after 17 years of service.

He makes them laugh, cuts cake with them, distributes freely toys and creates funny shapes from balloons. Donning a red nose, colourful clothes, tailcoat attire, top hat, with a string of jokes and magic tricks, taking the name Pintoo, he cheers the suffering kids.

Pravin says, “People who spend time in these places must be going through very painful experiences. If I am able to make them forget their pain even for a few minutes, I consider myself successful. Well, I guess quitting my job was worth it after all. Be happy and make others happy.”

“Let your smile change the world. But don’t let the world change your smile.”