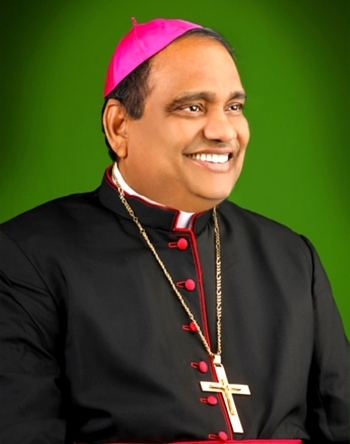 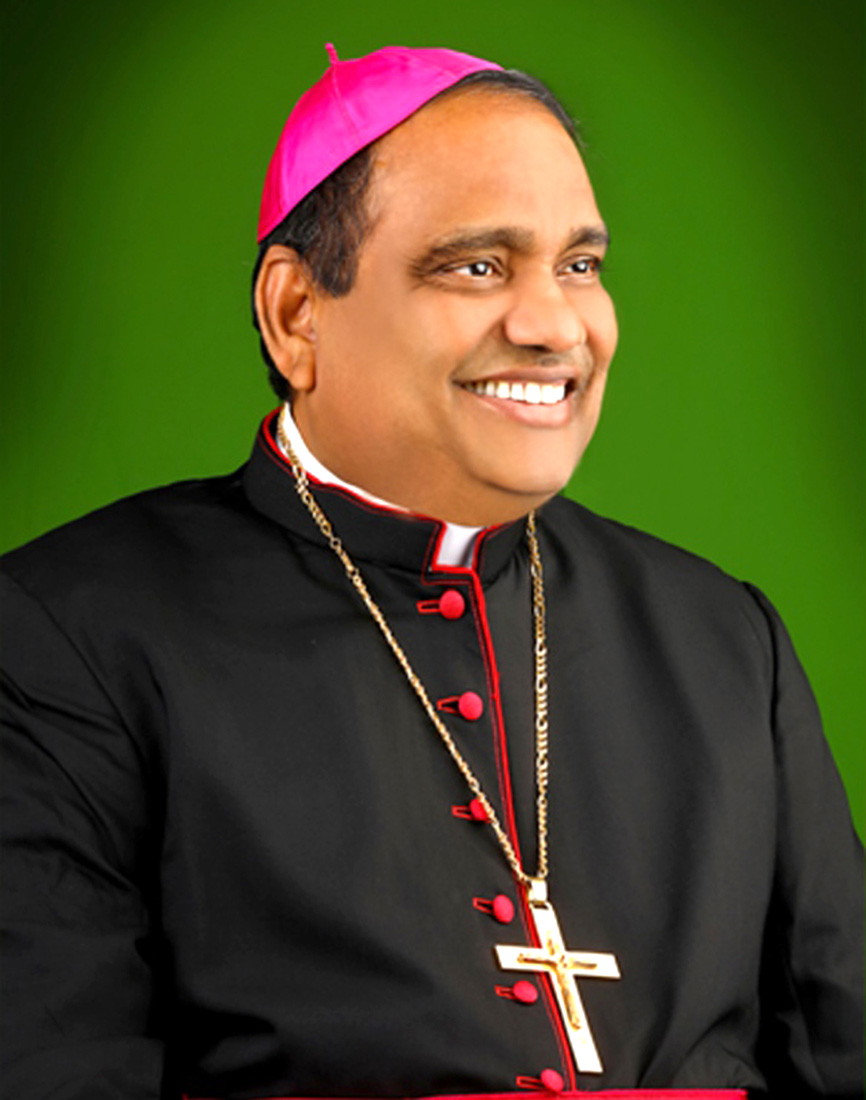 IC: Congratulations on your appointment to the College of Cardinals by the Holy Father. Could you share with our readers the uppermost sentiment which gripped you when you received the news?

Archbp Poola Anthony: Thank you, dear Father Suresh, for your kind appreciation and for inviting me to share my thoughts to the readers of Indian Currents. At the outset let me thank you for the wonderful service you do to the Indian Catholic Church and to the larger world.

The appointment as a Cardinal has surprised me, and, at first, simply I couldn’t believe. I was traveling at the time of the announcement and my friends began calling me. After receiving a call from the Nuncio in which he confirmed the news and congratulated me, the news began to sink in. There is no other way except to see it as God’s will, divine leela, as people say. In front of God’s presence and Holiness we all know how unworthy we are. God chooses whom he wants, and God is free to go out of the way. I have enjoyed serving God’s faithful as a priest. Then I was called to serve them as a bishop and then as the archbishop. When God chooses, I trust that God gives sufficient grace to carry on with the given mission.

Pope Francis continues to surprise the world, by his example, by his teachings and by the appointments he makes. I am humbled by his naming me and sincerely desire to rededicate myself to serve the Church to the best of capacities. I am grateful to the Holy Father for his trust in me and for the love he has for the Telugu Church in particular. The Catholics in two Telugu states rejoice at this appointment.

Also, a Cardinal is expected to keep all faithful in mind and work for them, by being the voice of the voiceless and reaching out to those who live on the peripheries. I need to hold all these and their spiritual nourishment (not merely those of my archdiocese or the Telugu States) in my heart and thoughts, and in my prayers and sacrifices.

IC: Is there any particular significance for the Church in India or the country to have two new Cardinals at the same time?

Archbp Poola Anthony: It is Pope Francis who chose two of us from India: in this, I am sure, he relied on the advice of others, and more importantly, he discerned it under the guidance of the Holy Spirit. Maybe, it is best to avoid reading too much into the appointments, from a secular or political point of view. While both of us represent a section of Indians, we are invited to be faithful, by being good and courageous shepherds. Indian Catholic Church is noted for its diversity, plurality, and, the people’s faith is profound. The challenges they face are many and we need to allow the Lord to renew and transforms us all. The values of God’s reign, that are much like the values enshrined in the Constitution, should be promoted for the peace and prosperity of all.

All of us are aware that there are millions of Indians, including the Catholics, who are deprived of dignity and rights and while we made a lot of progress in this regard, there is much that needs to be accomplished. As an archbishop, my call includes speaking to the conscience of all faithful. The call of the Gospel is a challenge to all of us. My prayer and appeal is that we allow the Lord to covert us so that we become disciples and builders of the kingdom. Our fellow Indians expect us to be authentic Christians, and together with people of goodwill, we can be on a pilgrimage together, receiving and sharing God’s blessings.

IC: As Cardinal, your role in the Church is enhanced. Do you have any special issues/suggestions in mind which you would like to bring to the attention of the Pope?

Archbp Poola Anthony: The role of a Cardinal includes collaborating with the Holy Father and being at the service of the universal Church. The Pope is aware of the various challenges people face in different corners of the world. Indian concerns will be uppermost in my mind and, eventually, I will share with him to what extent the teachings and exhortations of the Holy Father are received by our people and how far they are able to make a difference in the life of the faithful.

IC: Though the very concept of caste is opposed to Christian values (and also its discriminatory practice is unconstitutional), there is no denying the fact that ‘caste divisions’ do exist in the Church. How do you envisage tackling this ‘unchristian’ system?

Archbp Poola Anthony: There is no point in denying that caste exists and that references to caste are unavoidable in the contemporary Indian context. One can wish that it is not there or that we should forget it or live as if it does not matter. Such wishes may be sincere but reality is more complex, and millions of people continue to face discrimination. Down the timeline, in spite of the best of the intentions of the missionaries, caste, which is ingrained in the DNA of the people, could not be overcome. In this regard, it is important to look forward, and not backward. For what we got from the ancestors, we are less responsible but for what we pass on to the others, God will seek accountability from us.

We have a choice in front of us: to tell ourselves and others that we can decide to free ourselves from caste-mindset and build networks of relationships that are beyond ethnicity and language, region and religion. Tackling ‘caste’ in the Church needs pooling various human, material and spiritual resources and a willingness to change on the part of all. That all of God’s children should live a life of dignity and equality is God’s design and we all are summoned to collaborate.

IC: Pope Francis is particularly concerned about the cases of sexual abuse and financial scandals in the Church. What is your take on these issues in your new role as Cardinal especially in the context of the Indian Church?

Archbp Poola Anthony: Violation of human dignity in any form is harmful, sinful and punishable. Scandals in the Church wound the Body of Christ. Sadly, Indian Church had its own share in this regard. That said, there are also examples of several false cases that are put to tarnish the name of the Church or its personnel who continue to live dedicated and committed lives. The need of the hour is to educate ourselves, especially the clergy and the religious, so that people will see our centres and campuses as safe and trustworthy. In my view, the laws of the land and the CBCI policies and guidelines are powerful tools to direct our action.

IC: The Freedom of Religion Laws or the anti-conversion laws violate citizens’ freedom to preach, practice and propagate any religion of their choice. How do you look at these laws as the ‘Prince of the Church’?

Archbp Poola Anthony: In my view, Indian Constitution is a sacred document that offers a moral campus to us all. It is disheartening that several States have passed anti-conversion laws. I join all those who have been upholding the rights guaranteed in the Constitution and I sincerely hope that the laws of the land will prevail.

IC: It is significant that the Consistory for the Creation of the new Cardinals on 27 August will be followed by an important and historic (summer) Consistory on 29 and 30 August when all the Cardinals will meet with Pope Francis to deliberate on the new Apostolic Constitution on the Roman Curia, Praedicate Evangelium, which is in force from Sunday, 5 June, the Solemnity of Pentecost. Does this not have a very powerful and important message for the restructuring/ reforming of the Church at every level?

Archbp Poola Anthony: Pope Francis focused on the restructuring of the Vatican Curia, which itself had been proposed by the members of the Second Vatican Council and other later Vatican meetings. The Church is in need of reform is undeniable. The Holy Spirit is the author of any genuine reform. The first Pentecost is the mother of all reforms, at which the Holy Spirit animated the apostles to go beyond the known and to plunge into the unknown. True reforms reflect the changes that are in accord with the changing times. Respecting the diversity of calls and charisms, some of responsibilities can be reassigned. Our Lord who washed the feet of the Apostles and summoned them to love and serve will be with the Church in the path of renewal proposed by Praedicate Evangelium.