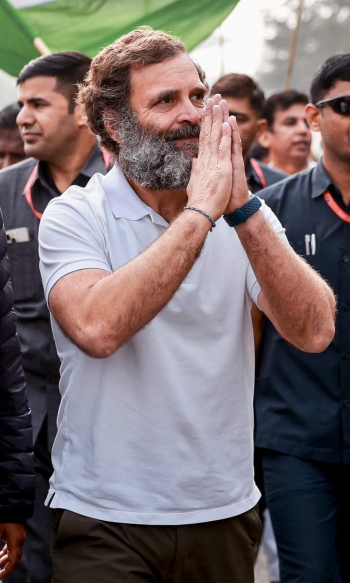 Walking With a Tapasvi

Bharat Jodo Yatra, which began over three months ago, is in the closing phase of its journey; it is now in Haryana and heading for its destination in Srinagar. I had been following this yatra from Kanyakumari, its paying homage to Swami Vivekananda rock memorial and then carrying on its route, which covers twelve states and two Union Territories. Despite it being shunned by the mainstream media, its impact began right from the word go. Now it is assuming humongous proportions. To begin with there was a prediction from opponents that it will be a miniscule phenomenon. This was belied by the people’s response. There was an argument that in North, cow-belt region, it will draw flak; but it is breaking records of sorts as people are joining it in unprecedented numbers in North too.

Personally speaking, I got involved with it when I attended the two-day conclave of civil society groups in Nagpur-Wardha to chart out the association with the yatra in Maharashtra from the civil society side. It gave me immense pleasure to see that most of the civil society groups, which numbered over 125 or so, were the grass root workers engaged with different struggles related to human rights. We listened to the threat of the divisive politics and need to restore the atmosphere of peace, harmony and justice which guided our freedom movement and which has been deeply eroded by the rise of divisive, sectarian politics, particularly in the aftermath of another yatra, which was taken out on the Rath (Chariot) by BJP’s Advani (a Toyota converted into Chariot looking body).

Anand Patwardhan, the outstanding documentary film-maker, had made a film around that yatra (Ram Ke Naam, In the name of God). He neatly compared Advani’s Yatra and Bharat Jodo yatra. As per him the Rath Yatra was followed by violence wherever it went while Bharat Jodo yatra is creating an ambience of peace and harmony. While Rath Yatra for demolishing the Babri Mosque was taken out by those whose commitment to Indian Constitution is under a shadow of doubt, the Bharat Jodo Yatra is committed primarily to uphold the values of the Constitution.

For me, the two-day conclave was mirror of the thinking and response of the civil society groups to the yatra. Most friends opined that the yatra is the need of the hour and lots of expectations are there from the same. Following it on Twitter and Facebook gave me enough idea that the yatra has touched the heart of the masses. The peak of this came in the form of response which Rahul Gandhi showed while meeting and greeting the people. He sounded like an empathetic, knowledgeable friend rather than a leader with inflated ego. Easy to approach and ready to listen to people’s woes, and reciprocating the love and affection of the people.

Finally, I got a chance to participate in the massive ongoing endeavor on 3rd January 2023 morning when it was to crossover from Delhi to Uttar Pradesh. The crowds, enthusiastic, singing and shouting slogans, was a sight to behold. What took the cake was a group with photos of Ambedkar merging into Yatra. Rahul himself was focusing on warmly responding to the greetings of people lining both sides of the road. I got a chance to walk with him for a little while. He did repeat that it is a tapasya (penance) for him. I did express that fulfilling the aspirations of people suffering the divisive politics, which is increasing the economic hardships of people, needs to be put at the core of the program which should emerge from this massive effort. Observing his demeanor, it sounds true that he is deeply committed to the concerns of the people. I pointed out that the plight of minorities worsened over the last decade in particular and needs to be addressed. His response was very affirmative.

As far as the larger picture is concerned it is very true that this yatra has dented the dominant divisive narrative. This courageous effort is successfully countering the ruling sectarian narrative and the values which emerged during freedom movement seem to be coming back to the fore. There are reports and observations that Muslim minority which has been feeling tormented in many ways may feel less so with the impact of this effort.

The problem remains that can the message of this Yatra be pan India, as large sections of the society remain comparatively less impacted by this mammoth exercise being undertaken by Rahul and many yatris who are constantly on the march. The question also comes in whether this will help Congress party to undertake inner churning to rediscover itself to repair the weaknesses which have crept in the organization. Can Congress become ready to combat the electoral battles more effectively? There is also an apprehension whether this narrative being put up by the lakhs marching will really influence the national spirit? And the million-dollar question comes up whether this matchless endeavor can help Congress party to be the core around which a national coalition can come up to uphold Indian Nationalism, in contrast to Hindutva-Hindu Nationalism with all its exclusive streaks dominating at present?

There are many opposition parties which are equally disturbed by the tendencies which have come up during last decade or so. Half-hearted coming together will not help in any way. A strong pillar of opposition is the need of the hour for future electoral battles. It is all the more important to restore our federal structure, to restore economic policies which are not based on charity but the concept of ‘Rights’ of the working people, concept of the right to employment and what have you.

The case lies in people’s court. Average people have unequivocally come forward to associate with the statements of the one who was projected as pappu or baba (privileged simpleton) till recently. His maturity and taking the issues of people is to be seen and believed. No doubt many civil society groups have lots of criticism of Congress for its past actions. This has lots of substance in that. The need of the hour is to ensure a change of regime and to be on guard against future deviations from the path currently being articulated by the Yatra. Walking a few steps with the Tapasvi gave me some hope for better of our country in the future!