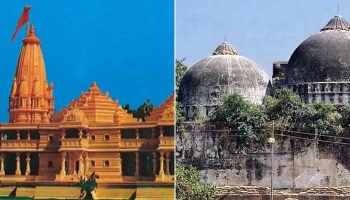 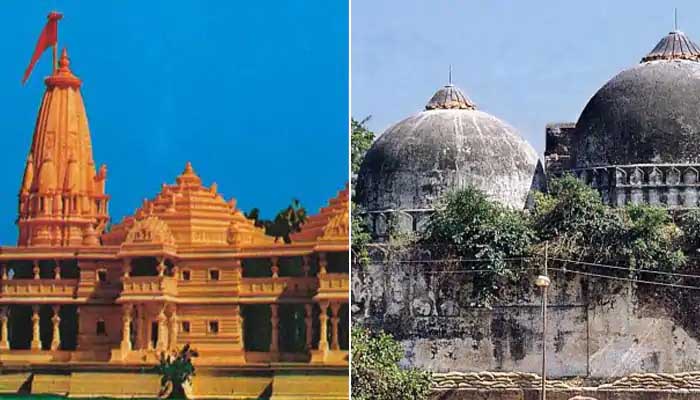 This 5th August (2020) the Prime Minister of India did the ground breaking ceremony (Bhumi Pujan) for Ram Temple in Ayodhya. The Prime Minster compared the 15th August to the 5th August, when according to him Lord Ram was liberated. Also he said that as all the people rallied behind Mahatma Gandhi to get India freedom so now all people have rallied together to liberate Lord Ram. The RSS chief who was present on the occasion quoted some shloka from Manusmriti.

It is wrong to say that from the last many centuries the struggle for Ram Temple has been going on as claimed by Narendra Modi. There is some mention of the some disputes for Ram Chabutara on the outskirts of the mosque in late 19th Century, but to say that Hindus have been struggling for this temple is a pure concoction. The issue came to forefront only from 1980s when BJP’s Advani took over the issue from VHP, who had begun the campaign that Lord Ram was born at the spot where Babri mosque is located and so we should build the grand Ram Temple, precisely at that spot. The Ram Temple campaign gained a heightened response in the aftermath of implementation of Mandal Commission, giving 26% reservations to OBCs.

The claim that there was Lord Ram’s Temple at that spot has been on tenuous grounds, Supreme Court in its judgement did not uphold this view of Lord Ram’s temple being there and Babar having destroyed it. The SC did not uphold the view that Lord Ram was born at precisely that spot. There are claims by some archaeologists that the remains of some pillars and other artefacts prove that temple was there, but it is disputed by other archaeologists. On the other hand while levelling the land for the Ram Temple, few months ago, the remains of Buddhist structure was found there.

As such the seeds of the dispute were sown by British; in pursuance of their ‘divide and rule policy’. Mrs. A F Beevridge while commenting on Babri mosque in Ayodhya put a foot note saying that there might have been a temple on which the Mosque was made. (Anatomy of Confrontation: Edited by S. Gopal, Penguin). In some versions of Ramayana (there are nearly 300 version of Lord Ram Story: A. K. Ramanujam), Dashrath was the king of Varanasi and not of Ayodhya. Similarly Valmiki Ramayana also does not mention the place of birth of Lord. Goswami Tulsidas, who wrote the most popular Ramcharitmanas, was living around the time when the Temple of Lord is supposed to have been destroyed. He also does not mention any such incident in his writings. The mythological issues cannot be compared to history. A.K. Ramanujam’s book gives brilliantly the diverse narrative of Lord Ram story, which is prevalent not only in India but also in various parts of South East Asia.

In recent history, the first incident which occurred was putting up of Lord Ram idols in the Mosque in 1949 in a surreptitious manner. This was done in the middle of the night. Jawaharlal Nehru, the then Prime minister asked the UP Chief Govind Vallabh Pant to get the idols removed but no action was taken by UP’s Chief. No action was taken by the District Collector, K.K.Nayyar, who after retirement joined the previous avatar of BJP, the Bharatiya Jansangh.

The mosque was locked and remained so till mid 1980s. Under the pressure of Hindu nationalists the gates of the disputed structure were open and Shilanyas was performed when Rajiv Gandhi was PM. This shilanyas was not at the site where it has been done now. This criminal act of Ram Lalla idols being kept inside is recorded by the SC judgement. Later on 6th December through communal mobilization three lakh Kar Sevaks assembled and destroyed the Archaeological monument in broad day light. The UP Chief Minster had given an affidavit to protect the mosque, but he backed out and later proudly proclaimed that he is gald about what he did.

Liberhan Commission, constituted by the Government, report mentions the BJP leaders as the culprits of this crime. Court cases are under progress on this issue and cases against Lal Krishna Advani, Murli Manohar Joshi and Uma Bharati are pending in the Courts. Ram Temple movement, the rath yatras led by Advani were the big polarizing factors in Indian politics. It increased the communalisation in society. It also presented Muslims as temple destroyers and widened the Gulf between the two main religious communities in India.

The Muslims Kings and Hindu kings both had destroyed the temples for wealth and political rivalries. Just couple of examples, Maratha armies destroyed a temple in Shrirangpatnam, which was repaired by Tipu. Aurangzeb got Vishwanath temple destroyed in Kashi, same Aurangzeb gave donation to many Hindu temples, and also destroyed one mosque in Golkonda. But here destruction of temples got associated only with Muslim kings, reflecting it on the Muslims of today and atmosphere of hate against Muslims was intensified.
This movement has been the major polarizing factor in contemporary India. Now the claims of Mr. Narendra Modi that the movement is centuries old is not true and nobody is able to challenge his assertions as lot of emotive element has been created in the whole issue. The ownership of land has been with Sunni Waqf Board. The judgement of 2010, Allahabad high Court was based on faith and the land was equally divided between three parties, two third going to Hindu side and one third to Sunni Waqf Board. The basis of judgment was the ‘faith of the people’ not the legal grounding of the case. Same thing was upheld by Supreme Court and despite recognising 1949 smuggling of Ram Lalla Temple and Demolition of mosque a crime; it allotted the whole disputed land to Hindu side and arranging for alternate site for the mosque. It was an irony of history that those who committed the crime were beneficiaries of the crime and achieved their target through a crime and other mayhem created by them.

The majority of Muslim community accepted the Supreme Court verdict with honour without any protest. They have been allotted five acres of land as compensation. While a Prime Minister who took oath by the Indian Constitution, went to inaugurate the temple building, it remains to be seen if he will go and inaugurate the building of Mosque in case Muslims decide to build one. His associate the Cheif Minster of UP, who was accompanying PM while temple ground breaking ceremony was done, did declare that he will not be part of Mosque building ceremony.

While today the Prime Minster is doing the ground breaking ceremony of the temple one recalls the similar incident in the aftermath of India getting freedom. There was a clamour that the state government should renovating Somnath temple, which was destroyed by Mahmud Gazani. Mahatma Gandhi said that building the religious places is not the work of the state. So a private trust built it. They invited Dr. Rajendra Prasad, the President of India, to inaugurate the temple. Jawaharlal Nehru, the Prime minster advised that the President should not do it in his official capacity, as the state is neutral in matters of religion. Same Nehru went on to lay the foundations of educational institutes, public sector, scientific establishments and what have you, to bring India on par with the Modern times. He also went on to label these, as ‘Temples of Modern India’.

Times have changed. Now temple building has become the agenda of the state and the education and health facilities have been passed on to the Corporate. While the Constitution says the state should not take up issues related to religion, the Prime minster goes to inaugurate the temple in full religious regalia. We need to bring back the values of Indian Constitution and welfare of the people on the centre stage of the society and leave the ‘matters of faith’ to the communities. The status quo in matters of places of worship should be maintained and plans to make more social facilities be brought on the forefront of social agenda. The whole episode has tainted the secular nature of state to no end. It has put a deep fright in the heart of minorities.

Can the secular character of Indian state survive is the question. Can state focus more on facilities for the poor and marginalized and delving in past as a cover of for revivalism be shunned. The history of Buddhist Vihars being destroyed by followers of Brahmanism also needs to be remembered, but past should be a matter for us for learning that wrong paths have to be shunned and the issues of people be brought to forefront so that all of us can live with dignity and honour.